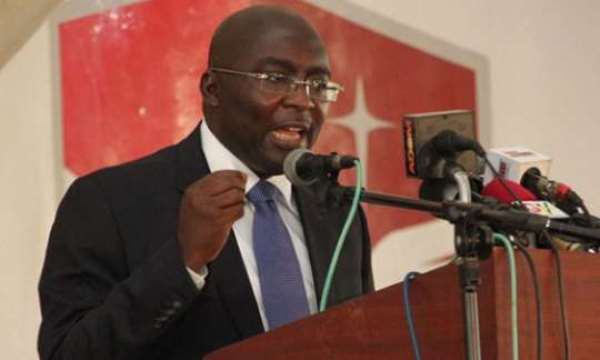 The Vice President, Dr Mahamudu Bawumia has announced that government is pursuing aggressive strategies in all sectors of the economy to propel 'Ghana beyond Aid'.

He said the road, housing and infrastructure, technology and innovation sectors were among the key priority areas of government's quest for economic independence.

The Vice President stated that government was working hard to push Ghana forward and make it economically capable of managing its own developmental affairs.

He said the government had finalized arrangement with SINO-HYDRO of China on Ghana's bauxite with a two-billion dollar deal of which one-billion would be expended on massive infrastructural development.

The Vice President was speaking at the 2018 Kuntum Festival of the people of Essikado Traditional Area, in the Sekondi/Takoradi Metropolis, under the theme: Culture; the Powerhouse for community development.

Currently, Ghana's bauxite reserves stood at 900, 000, 000 metric tonnes and the state's integrated aluminium corporation would continue to seek for joint ventures and other such helpful partnership that would make the resource a blessing to the country.

'This time, we are working very hard to maximize the benefits of all natural resources through policy interventions and new arrangement with investors, to ensure that Ghana benefitted much from all these resources', he added.

The Vice President called on all Ghanaians to make service to the country the biggest precedence, exhibit good behaviours and character traits to enable posterity to have a good memory about the present generation in the future.

'We are also changing the narratives in the extractive sector…we have not benefitted really from our natural resources…but this time, every company doing mining in the country would pay a commensurate measure on proceeds, they are going to pay their tithe also in the mining sector'.

He said very soon, government would commence the construction of over 570 dams in the three northern regions, alongside interventions such as the free SHS, Teachers allowance, and issuance of the National Identification Card among others, and called on the citizenry to do away with political differences and rally behind the state machinery for massive socio-economic development.

The Vice President said the country's hunt for economic independence hinges also on massive communal participation and enthusiasm, to achieve best results, adding that, 'No self-conscious society will allow its cultural values to be disintegrated by foreign ideals and principles'.

He reminded Ghanaians of the sacrifices of men and women, who have contributed positively to the development of Ghana, so there was the need for the current generation to eschew animosity and rather forge ahead with one mind and unity of purpose for development.

The Western Regional Minister, Dr Kwaku Afriyie said people without values and culture were lost people and stressed the need for individuals to clamour for positive traits and behaviours that inspired development.

He said 'the culture of dependency must end for culture of self-reliance to take over, since Ghana and the Western region in particular were endowed with lots of natural resources, enough to change the old paradigm of abundance resources but still a begging nation.'

Mr Joe Ghartey, the Member of Parliament for Essikado/Ketan Constituency, stressed the need to revisit the country's cultural values and the spirit beyond independence to ensure Ghana's total freedom.

'We have to rise as a people and free ourselves of the shackles of economic colonization', he added.

Mrs Catherine Afeku, the Minister of Tourism, Culture and Creative Art, bemoaned the fall in values and positive traits among the upcoming generation, saying that, there the need 'to rewind' for the progress of the country.

'It is about time we rejuvenated, redefined and evaluate our cultural values and draw inspiration for positive developments and socialization'.

'The unity of any group of people is guaranteed by their culture, which is a product of their religious belief'.

He noted that, the theme, 'Culture, the powerhouse for community development', was a timely call of action for the citizenry to hold on to the country's rich culture, be proud of it and improve on it, by eliminating negative practices whilst striving to bring both community and national development.

Ogyeahoho Yaw Gyebi II, the President of the Western Regional House of Chiefs, congratulated the committee for a splendid work, saying that, 'Let this ancestral celebration foster goodwill and more importantly, heighten awareness of indigenous heritage and traditions, as it brings community renewal and spatial development'.

Nana Kobina Nketsiah V, the Omanhene of the Essikado Traditional Area, under whose auspices the 2018 Kuntum was celebrated, was grateful to all and sundry for making the celebration a memorable one.

He however complained about the state of affairs of the country, in terms of developments, saying, 'It is irresponsibility to walk on gold for so many years and still be a poor nation'

"Let's live in our dreams as a country for the development that we seek to achieve'.