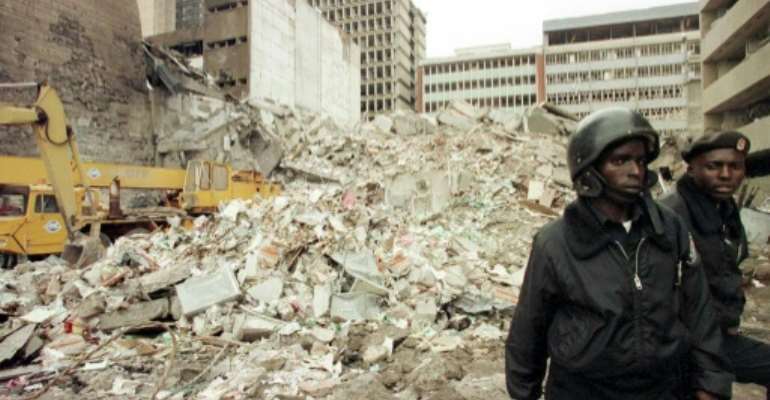 The 1998 bombings introduced the world to Osama bin Laden, three years before the 9/11 attacks would make him a household name. By ALEXANDER JOE (AFP/File)

Kenya and Tanzania on Tuesday mark 20 years since the devastating US embassy bombings that thrust Al-Qaeda onto the global stage and went on to shape how a generation thinks about personal security.

It was mid-morning on August 7, 1998, when the first massive blast hit the US embassy in downtown Nairobi, followed minutes later by an explosion in Dar es Salaam, killing a total of 224 people and injuring around 5,000 -- almost all of them Africans.

With two monster bombs loaded onto the back of trucks and a trail of carnage in east Africa, the world was introduced to Osama bin Laden three years before the September 11 attacks in New York would make him a household name.

"It wasn't the first time Al-Qaeda had carried out an attack, but in terms of the spectacular, catastrophic nature of the incident, they really announced their entry onto the world stage," said Martin Kimani, head of Kenya's National Counter Terrorism Centre.

"When 9/11 happened it was shocking and surprising, but a precedent had been set here in east Africa."

According to "The Looming Tower", a Pulitzer Prize-winning book on the rise of Al-Qaeda, bin Laden gave various reasons for targeting the embassies, such as the deployment of American troops to Somalia and a US plan to partition Sudan, where he had lived for five years until being expelled in 1996.

However, author Lawrence Wright concluded that the main goal was to "lure the United States into Afghanistan".

This aim was achieved, in the aftermath of the attacks, with the US launching strikes on Sudan and Afghanistan that were "largely seen as ineffective", said Daniel Byman, a counterterrorism expert at the Brookings Institution. 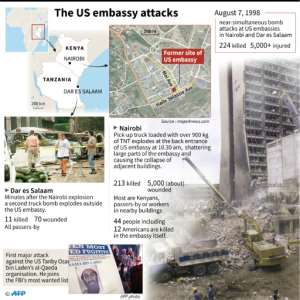 20th anniversary of the attacks against US embassies in Kenya and Tanzania on August 7, 1998.. By Kun TIAN (AFP)

The strikes led the Taliban in Afghanistan to "embrace the group more closely", he said, and also boosted the image of a group seen as standing up to the United States in the Muslim world.

Byman said the attack was the first to show that Al-Qaeda "had tremendous reach and it can do sophisticated operations".

"It showed Al-Qaeda that international terrorism could generate tremendous attention, and not just attention from its adversaries... it was a form of advertising in a way."

The years since 9/11 have been shaped by the so-called "war on terror" and the proliferation of American military operations -- notably in Afghanistan, Iraq and Pakistan.

At the same time, Al-Qaeda went on to inspire affiliates around the globe, carrying out attacks across the Middle East as well as from Bali to Madrid, London and Paris.

Islamist insurgencies have wreaked havoc in the Sahel, Nigeria and Somalia, and -- on several bloody occasions since the 1998 bombings -- Kenya.

"Kenya itself was not primarily the target but of course we ended up with the majority of fatalities and consequences of that attack," said Kimani.

"We continue to be on the frontlines of this struggle."

Two years after Kenya sent troops across the border into Somalia to fight the Al-Qaeda-linked Al-Shabaab -- which had been carrying out attacks on its soil -- the group killed 67 people in an attack on the Westgate shopping centre in Nairobi in 2013. 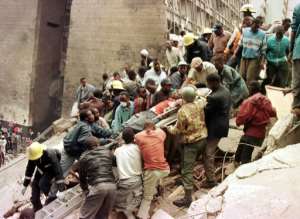 Most of the victims of the Nairobi and Dar es Salaam bombings were Africans. By - (AFP/File)

Then in 2015, a Shabaab attack on the Garissa University in eastern Kenya left 148 dead.

However, Kimani said counterterrorism efforts by Kenya had proved successful, confining Shabaab attacks to remote areas in recent years as a result of new anti-terror legislation and improved co-ordination between different security forces.

He said efforts to build trust with communities where jihadists hide out, and understanding how recruitment happens to nip it in the bud has also been key.

"The threat is still there, believe me, but 20 years later we have become much better at dealing with terrorism than we used to be," he said.

"Globally terrorism has left a deep, deep social imprint. It has changed the way people think about security. Here in Kenya there are guards at malls and hotels and that is replicated in many parts of the world."

Kimani said governments need to focus on improving livelihoods and providing basic services to erase the "pockets of desperation" that prove so fruitful for recruitment.

In recent years, attention has swung away from Al-Qaeda to its rival Islamic State (IS) group which formed in 2013, captured swathes of territory and inspired numerous so-called "lone wolf" attacks from afar.

However, experts warn that while IS has since lost its territory and reach, Al-Qaeda has been quietly rebuilding.

"Their ideological ability to be grafted onto local grievances continues to make them a threat," said Kimani.