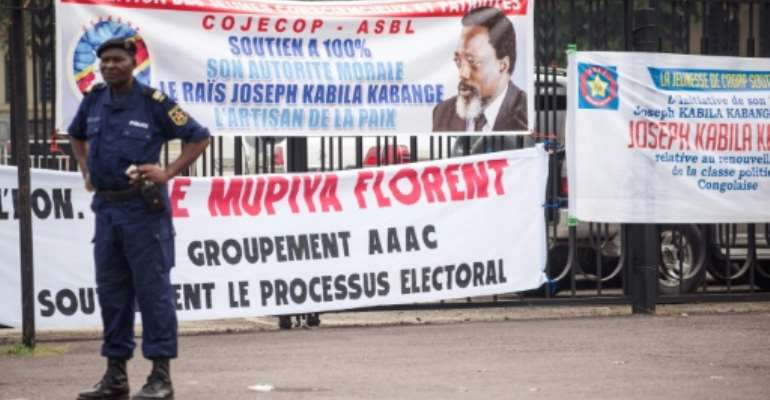 Banners are seen in support of President of the Democratic Republic of Congo, Joseph Kabila, who has promised to step down but still wields influence over who his successor might be. By Junior D. KANNAH (AFP/File)

Supporters of DR Congo President Joseph Kabila were making "final adjustments" on Saturday, four days before they must choose their candidate for a December 23 presidential election, a government spokesman said.

"We are not talking about an heir apparent to please foreigners. Our platform's candidate for the Common Front for Congo (FCC) will be known by August 8," Lambert Mende told AFP.

"We are making the final adjustments," said Mende, stressing consultations had to be made with various groups under the umbrella of the FCC.

The FCC is a "grand political electoral coalition" created by the cabinet earlier this year "to provide support for a single candidate" for the elections. It has named Kabila as its "moral authority".

Mende stated that "everything is being undertaken without foreign interference as we absolutely insist that our country's next leaders are chosen by the Congolese themselves."

There has been fierce speculation that Kabila, who has been in power since 2001 and is ineligible to run again, will seek another term.

Kabila told lawmakers last month he would respect a constitutional bar on standing again in a vote which has been much delayed in the vast mineral-rich country.

It was scheduled to take place two years ago and will finally go ahead after dozens have died in repeated anti-Kabila protests.

The DRC has never known a peaceful transition of power since independence from Belgium in 1960.

Kabila has asked each group forming part of the FCC to propose four names meeting 11 criteria from whom he will designate his choice as the best candidate to go forward.

Former rebel chief and former vice-president Jean-Pierre Bemba, freshly acquitted of war-crimes convictions in The Hague, who flew back to the capital Kinshasa this week to lodge his candidacy.

But the authorities have barred wealthy businessman and former governor of the province of Katanga Moise Katumbi, who was turned back at the border after being charged with offences against state security.

The cut-off date for candidates to submit their applications is August 8.