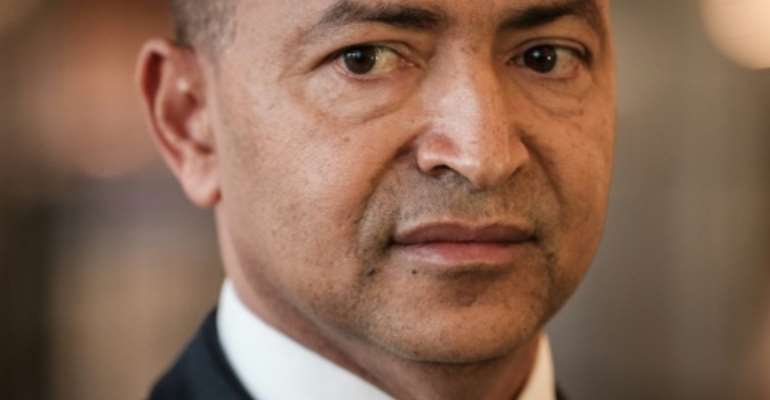 DRC opposition leader Moise Katumbi has been living in self-imposed exile in Belgium since May 2016. By Yasuyoshi CHIBA (AFP/File)

The Democratic Republic of Congo barred an opposition leader from returning home Friday to file a bid to run in the volatile country's presidential elections.

Moise Katumbi, a wealthy businessman and former governor of the province of Katanga, was forbidden to enter the DRC and charged with offences against state security, officials said.

Katumbi, 53, has been living in self-imposed exile in Belgium since May 2016 after falling out with President Joseph Kabila.

He had planned to fly by private jet from Johannesburg to Lubumbashi, the capital of Katanga province, to lodge his application to stand in long-delayed elections in December -- a move that would heap pressure on Kabila.

But the city's mayor said Thursday that Katumbi was refused entry, while the public prosecutor's office said Katumbi had been charged with "harming the state's domestic and external security" and would be immediately arrested if he returned.

Katumbi's spokesman Olivier Kamitatu said Friday "authorisation to fly over and land had been refused by Kinshasa".

Katumbi told AFP later that he had arrived in the Zambian Copper Belt city of Ndola and was heading to the border post of Kasumbalesa.

A journalist with the French radio network RFI said he had arrived there. Videos posted online by his aides and others showed him on the Zambian side of the border, greeting hundreds of supporters from his car.

The DRC's border authorities in Kinshasa said they were unable to confirm whether the crossing had been closed.

At least two police checkpoints were set up to screen access to Lubumbashi's airport on Friday and the city's main road to Zambia was blocked by a truck, an AFP journalist said.

Katumbi already faced potential arrest after being handed a three-year jail term in absentia in June 2016 in a case of alleged property fraud.

He has also been accused of hiring mercenaries and for possessing an Italian passport -- Congolese law does not allow dual nationality. He denies the charges in both of those cases.

Another rival of Kabila, former warlord and ex-vice president Jean-Pierre Bemba, 55, returned home this week. He officially launched his bid for the presidency on Thursday.

The DRC has never known a peaceful transition of power since it gained independence in 1960 -- and some experts fear that the December 23 elections may trigger a bloody conflict.

Kabila, 47, has been at the helm since 2001, presiding over a vast mineral-rich country with a reputation for corruption, inequality and unrest.

He was scheduled to stand down at the end of 2016 after his second elected term, technically the last permitted under the constitution.

Kabila has refused to spell out whether he will seek a new term in the vote. Candidates must submit their applications by August 8 and physically be in the country to do so.