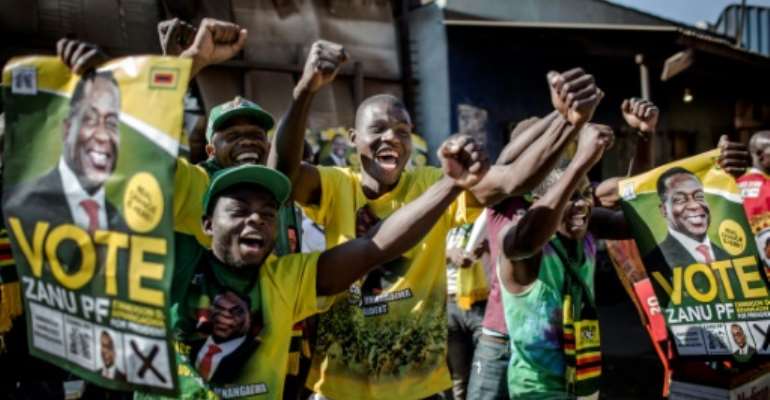 Supporters celebrated after Zimbabwe's President Emmerson Mnangagwa was declared the winner in the country's landmark election. By Luis TATO (AFP)

Just before announcing the results, Zimbabwe Electoral Commission chief Priscilla Chigumba made a passionate plea for the country to remember the upbeat and peaceful atmosphere of polling day.

"It is my most humble wish that we as Zimbabweans should continue in this spirit that we had on election day and that we should move on in this spirit," Chigumba said, before declaring Emmerson Mnangagwa the winner in the early hours of Friday.

But the election that ZEC ran has done little to build confidence that Zimbabwe has entered a new era of free and transparent voting after autocratic leader Robert Mugabe was ousted last year.

Instead Mnangagwa's narrow win for the ruling ZANU-PF party has been engulfed by accusations of fraud and malpractice by ZEC, as well as anger over soldiers shooting at an opposition protest where six people were killed, two days after Monday's election.

MDC opposition leader Nelson Chamisa -- who has accused ZEC of playing for the same "team" as ZANU-PF -- rejected the results and lashed out at what he called the "opaqueness, truth deficiency, moral decay and values deficit" of the election.

International observers have also questioned whether the election lived up to Mnangagwa's promise to hold a "free and fair" vote to mark a new chapter for Zimbabwe and end the country's isolation.

The European Union observers' preliminary report accusing ZEC of a "persistent lack of inclusivity and transparency" and said its communications were poor.

ZEC was synonymous with fraud and bias under Mugabe, when elections were often marred by deadly violence.

Back in 2008, the commission attracted international ridicule for endorsing that year's election as credible after then opposition leader Morgan Tsvangirai pulled out of the presidential run-off when more than 200 of his MDC supporters were killed.

Chigumba, a high court judge, was appointed to the high-profile job in January to give ZEC a fresh start after Mugabe's fall last November.

As a respected judge, she is best known for reversing a two-week ban on protests and clearing activist Evan Mawarire in 2017 of attempting to overthrow Mugabe's regime.

"The key tenets for a credible election are transparency and accountability -- and ZEC is averse to both," Tawanda Chimhini, head of Zimbabwe's Election Resource Centre monitoring body, told AFP ahead of polling day.

"Zimbabwe could have seen a departure from the old way, and ZEC could have been much more transparent -- that would have built public confidence. But the commission is making the same mistakes."

At the helm of ZEC, Chigumba has defended the body rigorously, taking out full-page newspaper advertisements to deny reports that the electoral roll was riddled with fake names, duplicates and dead people.

She also faced claims of bias over the layout of the ballot papers, which -- set out in two alphabetical columns -- gave Mnangagwa a prominent spot at the top of the page.

"We are absolutely confident there was no rigging... we at the Zimbabwean Election Commission will not steal (the people's) choice of leaders, we will not subvert their will," she said after polling day.

But UK-based political analyst Alex Magaisa said that ZEC "has been found wanting" and "failed to handle its enormous obligation as an impartial referee".

"There is a broad perception of bias which owes much to history, but is also cemented by current indiscretions," he added.