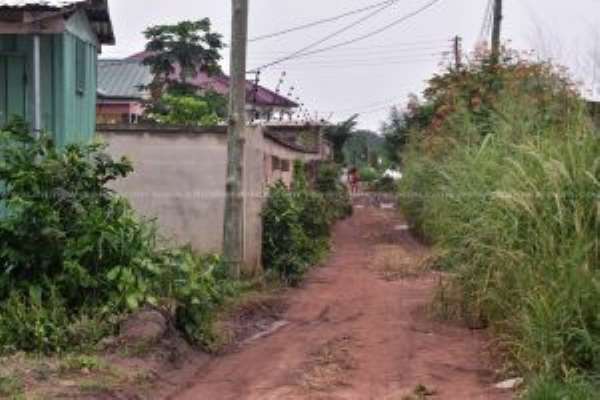 A conspicuous expanse of land with overgrown greenery at the Shalom Estates, near Pantang in the La Nkwantanang-Madina Municipality, has over the years has become a shelter for crime and a haven of dangerous animals.

The thick stretch of green is on the property said to be owned by Trassaco, but there has been very little activity on the land for over a decade.

The residents only want Trasaco to keep the land well maintained to reduce the perceived threats to their domesticity.

Some of them have said they would be willing tend to the land if Trasaco wasn’t so protective. 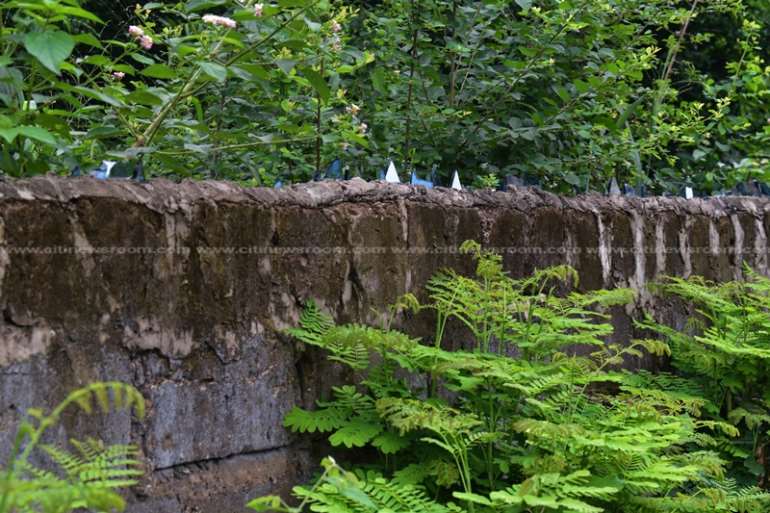 Adolf Tetteh Adjei, the Assembly Member for the Pantang electoral, explained that Trassaco “won’t allow anyone to go there.”

“There is a security man working there. Even you can't cut a stick over there. You will be arrested.”

Hajia Salamatu Atchulo, who first came to Shalom Estates in 2002 and has been living there since 2007, came to meet the large swathe of green that is home to animals that residents consider threats.

“This area is a residential area, however you find in front of us this forest,” she said summing up one-half of the community's concerns.

They have to contend with what the feel is an excessive amount of cockroaches, rats, scorpions, and snakes.

“In this forest, there are many types of animals. Everything that is supposed to be in the bush is here.”

The residents harbor a particular fear for a large python they say patrols their eroded feeder road at night.

“There is a huge python in the forest which comes out every midnight. Most taxi drivers in this area have come across it. So now, when you take a taxi, they don't want to come to this area,” Hajia Salamatu noted. 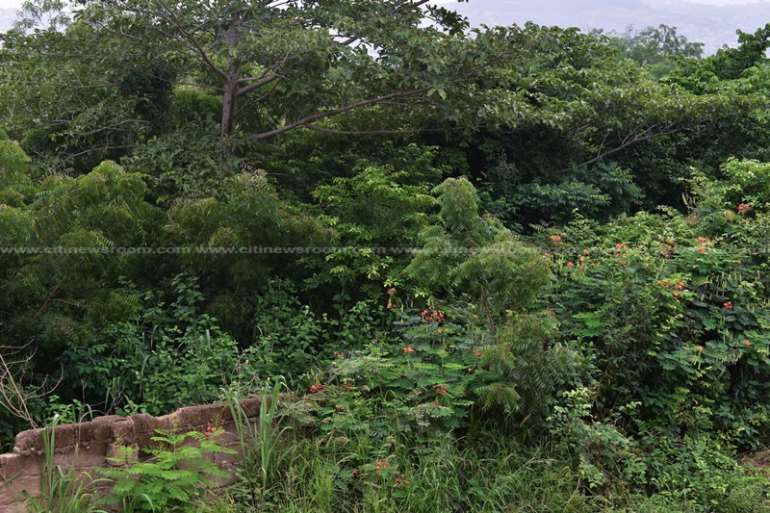 The area is fumigated about every six months to provide some relief from the rodents and poisonous animals.

“In less than 30 minutes [after the last fumigation], more than 20 scorpions [died]; the big black ones and by the following morning we couldn't come out [of our rooms]. They were all over the yard,” Hajia Salamatu recalled.

Shalom Estate Residents Association is aware of the problem, but appears to have its hands tied because there is no overt illegality being perpetrated by Trassaco.

Emmanuel Ogoe, the Chairman of the Association, stessed his concern for the residents saying the threats were “obvious.”

But he noted that “this is somebody's land. They have fenced it. So I don't see how I can complain… I don't know where the association comes in here.”

“If you share the boundary with somebody and his place is overgrown, I don't know what we can do… if their compound is bushy, I find it difficult telling them to weed their compound,” Emmanuel Ogoe stated.

Crime concerns
Fumigation may be able to keep some dangerous animals at bay, but the community’s fear of crime still abounds.

The residents believe the state of the land makes it a perfect hiding spot for criminals.

“The worst part is the armed robbers. The moment they chase armed robbers, they jump into the forest, and that ends it,” Hajia Salamatu said. 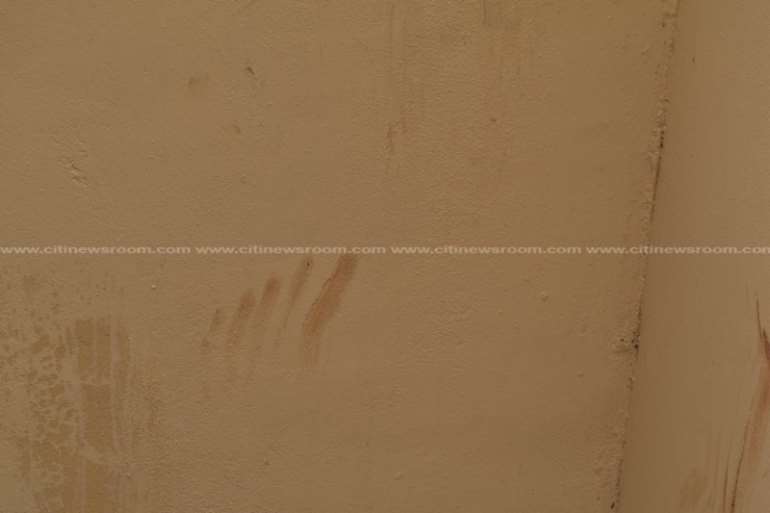 A resident highlights this footprint on a wall believed to be a burglar’s.

Another homeowner living across from the forest, Geaton Azurah, lamented the lack of urgency towards the crime situation from the police and the Assembly.

Earlier in the year, a man reportedly hanged himself in the area, prompting a rare police and assembly response according to some of the residents.

But Geaton recalled that it resulted in little action.

“We thought when they were going with the body; we would hear something from them [Assembly] but nothing.”

“The police came and recorded the case of a guy raping a nurse and butchering the lady; just recently. Last three or four months,” Geaton added. 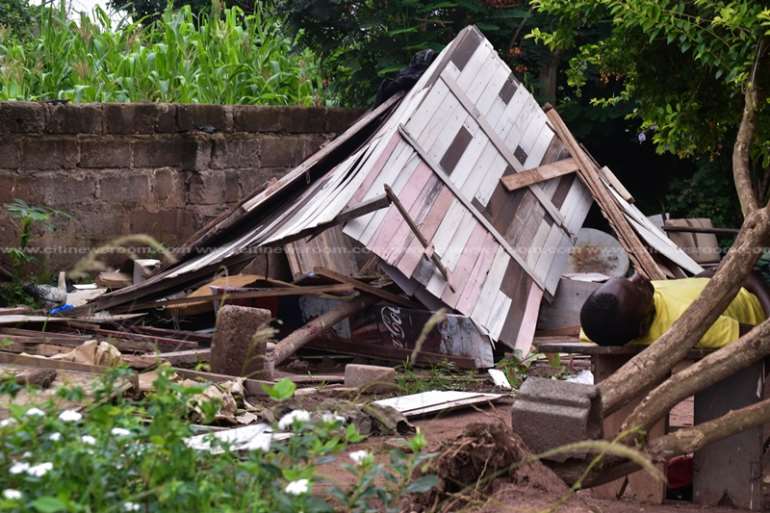 This was a suspected criminal base
By a section of the walled land lay the ruins of what was believed to be a hang out for some criminals. The base was reportedly destroyed by some security personnel when an influential man in the area was attacked.

But that appeared to be the strongest action against crime in the area.

Call for compromise
Like most of urban areas in Ghana, the Shalom Estates is home to a cross-section of persons from diverse backgrounds and economic classes.

In between two large buildings is an uncompleted one where Bright Ampem lives with his family.

While he is fortunate to have a roof over his head and has a warm relationship with some of the residents, others sometimes suspect him of the criminal activity. 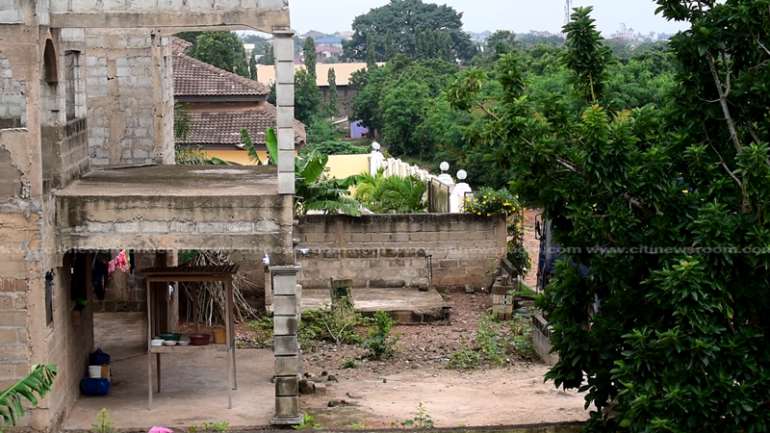 “When these things happen, people think that because I live in an uncompleted building I am the one stealing. They have those negative thoughts about me.”

Nonetheless, he has proffered his solution to the community's problems; farming.

“Even if they [Trassaco] can't clear the land, some of us here, we can clear the land and farm on it in the meantime. We will farm. We won't take the land anywhere, and the place will be clear.”

Adolf Tetteh Adjei, the Assembly Member for the area, said he has forwarded the complaints of the concerned residents to the Municipal Assembly.

He also feels allowing some of the residents to farm on the land could help keep it clearer and less conducive to criminals.

“Myself, I am a farmer, so if we can lease the land to farmers, we can farm there so that [the problems will be solved… It is a matter of compromising with the company.”

Covid-19: Ghana not part of countries banned by Netherlands ...
43 minutes ago