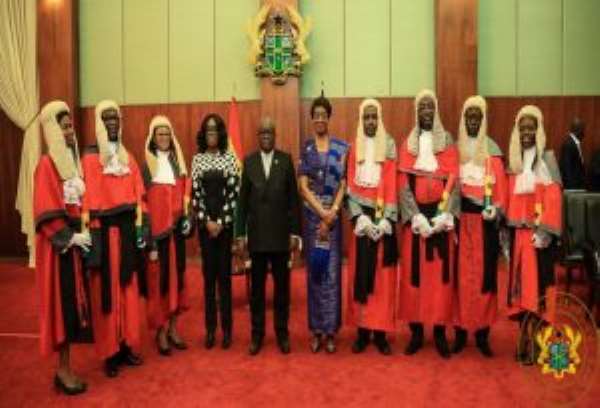 President Nana Addo Dankwa Akufo-Addo has urged judges of the High Court, to be honest, possess integrity and exhibit a sound knowledge of the law in the discharge of their duties.

According to President Akufo-Addo, the situation, where judges proffer judgment on the basis of decisions from lower courts and cite them as law, is not acceptable, and even less so, when judges cite no authority at all for their rulings and give orders without reasons.

“You must be learned, know your case law and ensure your judgments are properly motivated. The principle of stare decisions, the ancient common law doctrine of precedent, has been, and continues to be the time-honored foundation for the coherent development of the law, and should not be lightly discarded,” he said.

President Akufo-Addo made this known on Wednesday, 1st August 2018, when he swore into office seven new High Court judges, at a brief ceremony at Jubilee House, Accra.

Describing the High Court as “the focal point for justice delivery in our judicial structure”, the President indicated that much of the work of the Judiciary begins and ends there.

“It is, therefore, critical for the growth of our nation that the High Court commands the respect of the people by the quality of its justice, as well as by the comportment of its judges,” he added.

Despite the exposé of Anas Aremeyaw Anas into judicial corruption, President Akufo-Addo stated that news persists of perceived acts of corruption in the delivery of Justice, especially at the High Court.

“This cannot, and must not be allowed to continue, and any judge, found to be misconducting himself or herself, should know that he or she will face the full rigors of the law,” he said.

The dispensation of justice, President Akufo-Addo said, requires that application of the laws of the land must occur, “in the hallowed words of the judicial oath, without fear or favour, affection or ill-will, that is, without recourse to the political, religious or ethnic affiliations of any person the object of justice.”

He continued, “When a citizen falls foul of the law, any citizen, high or low, that citizen must be dealt with accordingly, and the law enforcement agencies, including you, our new judges, must ensure this is done. That is the true meaning of the concept of equality before the law.”

The President reiterated that, in our time, the Ghanaian people must build “a new Ghanaian civilisation, where the rule of law is not a slogan, but an operating principle for the development of our State, where the separation of powers is real and meaningful, where public officials behave with honesty and integrity, where the liberties and rights of our people are fully protected, and where law and order provide a firm basis for our social and economic development, so that the dreams of freedom and prosperity that animated the great patriots, who founded our nation, can find concrete expression in our generation.”