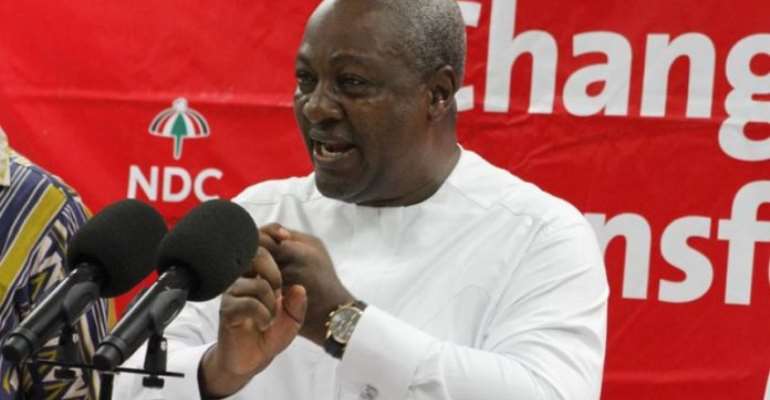 The Central Regional Chairman of the opposition National Democratic Congress (NDC), Bernard Allotey Jacobs has opined that the Former President of Ghana, Mr. John Mahama is a 'statue' in the party.

His comment follows a report that 94 Minority MPs have endorsed Mr. Mahama and shunned other presidential hopefuls even before the party holds its internal elections.

The party has chosen December 7, 2018 for its presidential primaries to elect its candidate to lead the party in 2020 general elections.

A total of 94 Members of Parliament in the NDC have reportedly endorsed Mahama for the party’s flagbearership.

At least one of the MPs has since said he was tricked into signing the supposed endorsement sheet.

MP for Odododiodo, Edwin Nii Lantey Vandapuye, argued the endorsement stemmed from the fact that the former president who lost the 2016 election to Nana Akufo-Addo, is the only candidate who can lead the party to victory in the next elections.

Meanwhile, Builsa South MP, Dr Clement Apaak, is reported to have said on Asempa FM on Tuesday, 31 July that out of 106 NDC MPs, 94 have endorsed Mr. Mahama as their preferred candidate for the flag bearer slot.

It has been suggested that the MPs have even formed a group called MPS4JM (Members of Parliament for John Mahama) with the full support of their constituents.

But Allotey Jacobs on Asempa FM’s Ekosii Sen programme Wednesday said, Mr. Mahama is now a 'statue' in the NDC hence does not need the support of anyone to win.

"John Mahama is now a statue, an institution, a pillar in NDC and doesn't need any sitting MP to endorse him, he is winning the primaries by 100%", he emphasized.

He added that those MPs who have endorsed Mr. John Mahama are opportunists. "MPs endorsement is political opportunism and John Mahama does n kg need it".

Uncle Allotey Jacobs was certain that former President John Mahama will get 100 percent vote from Central Region and emerge the presidential candidate for the NDC party.

"John Mahama will get 100 percent vote from my Region and win the primaries and I will support him to win, John Mahama is the best bet for the NDC to recapture political power in 2020", he opined.

Reacting to NDC MP for Keta Constituency of the Volta Region, Hon. Richard Quarshigah for saying that the era of Johns are over, Allotey Jacobs laughed and said the era of Johns are not over and reaffirmed his comment that Mr. John Mahama is the best candidate for the NDC party.

He also advised any MP who is jet to kick against John Mahama's candidature to desist from it else that MP will lose his or her seat.

He however, added that, those lacing their boots to contest Mr. John Mahama just to be considered as running mates and therefore told them to forget about the running mate position.