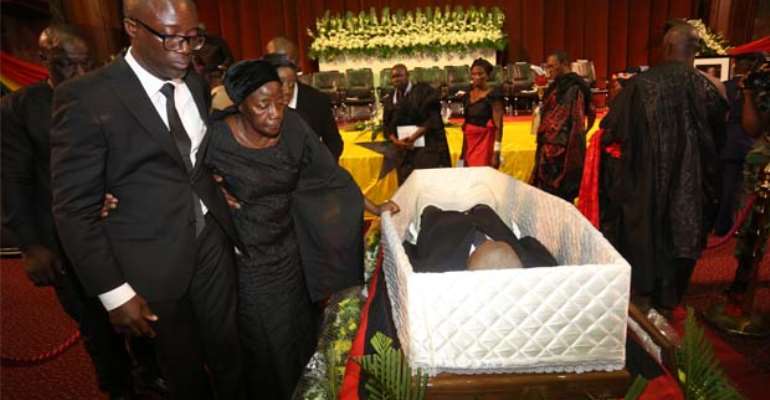 “Like as the waves make towards the pebbled shore, so do our minutes hasten to their end; Each changing place with that which goes before…”

Shakespeare Sonnet 60
“There is this concept of politics as a dirty game. It's a difficult game,

but it doesn't have to be dirty…”

IT IS WITH A HEAVY HEART that I write today's piece. How I wished the opportunity would have offered itself to “…rejoice with those who rejoice and weep with these who weep”. Rather, unfortunately, I have been compelled by circumstances to shelve traditional etiquette and custom to debate the tribute by Mrs. Matilda Amissah-Arthur for her husband, Kwesi Amissah-Arthur at the Accra International Conference Centre.

Matilda read: “Over the last few weeks, I have been amazed at the number of people who have come to show appreciation and I ask myself: 'Is this Ghana?' Are all these people in Ghana because of the maligning, the lies, the treachery, the wickedness, the mischievousness…? Is this my own husband that you have come to pay tribute to…? Did people really know my husband…? We knew you, and we know you are a gem and we treasure you…We often discussed how we could get people to think about Ghana first, stop being partisan and also give back to society…My dearest, me, your children-Kwesi, Maame Boatemaa, Yaw Akyere; your grand-children – Emily, Kwamena and Eliana- we knew you and we know you…”

Among those who do not see anything wrong with this tribute is Dr. Lawrence Tetteh, the Founder and President of the Worldwide Miracle Outreach who insists that Ghanaians are fond of “…spewing lies”.

Dr. Lawrence Tetteh added: “In the culture of Ghana, people's credibility, people's testimony, people's hard won reputation are undermined because of this day and age of social media and radio but we should also come to that place where we can appreciate people and give them living testimonies while they are still alive”.

Kennedy Agyapong in his comment at Adom FM TV's Morning Show 'Badwam' observed that Kwesi Amissah-Arthur was disregarded by a section of Ghanaians, especially members of his own party despite his decade's worth of service.

Samuel Nartey George MP for Ningo-Prampram has remarked that the tribute was a wake-up call to the nation. The speech “…delivered extempore with so much passion (was) a wake-up call to the conscience of our nation and politics… we are a pretentious people who malign and destroy people whilst alive and celebrate (their) death”.

There can only be two sides to a coin. There will, therefore, be those for, and those against the tribute, or at least its rendition. Daily Guide editorial on July 30, 2018, was headed “And Funeral Etiquettes Vanished”. It begun: “Mrs Matilda Amissah-Arthur is not known to be decorous or even calm-natured. Her public performance last Friday was characteristic of her. What bothered those who are shaken or even disturbed by her angst and the innuendo-laden expression following it, was the venue for the outburst:…”

And it is the “venue” that some of us are concerned about. Who were the personalities at the venue: the current head of state, Nana Addo Dankwa Akufo-Addo and the Vice President, Alhaji Bawumia; three ex-heads of state, JJ Rawlings, JA Kufuor, Dramani Mahama: the clergy – a whole array of the religious hierarchy – Bishops, Priests, Pastors; Ministers of State, Members of Parliament; Security Capos, Members of the Diplomatic Corps, Traditional rulers – you name them. Was enough respect shown to this august gathering?

What or who were the target of the attack? Was the attack aimed at the players within the corridors of the NPP or NDC? Interpreted either way, the question is whether the tribute breached any of our African or Ghanaian courtesies, our custom, our tradition, our values. For an answer to this, Daily Guide states: “…We wish to remind Matilda that at such solemn occasions, negative things are not said about the dead, these are overlooked as a standard”.

When the late President Attah-Mills died, his wife's (Dr. Ernestina Naadu Mills) tribute was a non-committal twenty-worded piece: “Fiifi, you were a blessing to me, Ghana, Africa and the World. Rest peacefully in the bosom of the Lord. Ernestina.” She did not even read it herself.

Since the death of her husband, the former First Lady has been given space, time and the peace of mind to mourn the loss. Will Matilda enjoy these attributes given the kind of feedback (observations) that her tribute has attracted? Let us pray she does.

What every Ghanaian-aspiring Presidents and the First-Ladies-in-waiting should know is that 'Politics (in our part of the world) is a dirty game'. Let us hope it will change, though. We may like it or not like it. But the moment one decides to go deep into politics, he or she should be ready to bear the consequences. You may enjoy the good benefits of politics. As the first and second gentlemen of the land, the President and the Vice President enjoy all the goodies: free everything, not taxed! The ordinary Ghanaians will provide the wherewithal for their sustenance. In return, they become the “property” of the state. They are the foremost and the focus will definitely be on them.

Despite the explanations given later by the spokesperson of Matilda, the observation is that she missed the opportunity to behave like a loving mother to all Ghanaians, including her husband's family. We do not wish to remind her about the 'Chalk Story of Kukurantumi'. She is mourning, so we shall spare her the ordeal that will go with a reminder of that episode. We wish Matilda, her loving children and the family, yes, the larger Abusua of Amissah- Arthur well. Our condolences!