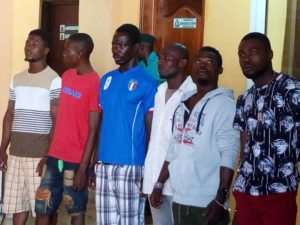 
From Alfred Adams, Takoradi .
Combined teams from the Bureau of National Investigation (BNI), Marine Police, Ghana Ports and Harbours Authority (GPHA) security and Immigration Service have arrested six suspects for attempting to stowaway in a Europe-bound vessel at the Takoradi Port.

The Takoradi Port Marine Police Commander, ACP Seidu Idi, told the media that the suspects used bamboo sticks as a ladder to climb into the vessel, which he named as MV Acquitania.

ACP Seidu Idi said when the vessel was about to sail, the security men decided to conduct a thorough search and discovered the suspects hiding in one of the compartments.

An independent search conducted by The Chronicle revealed that all the suspects come from New Takoradi, a suburb of Takoradi.