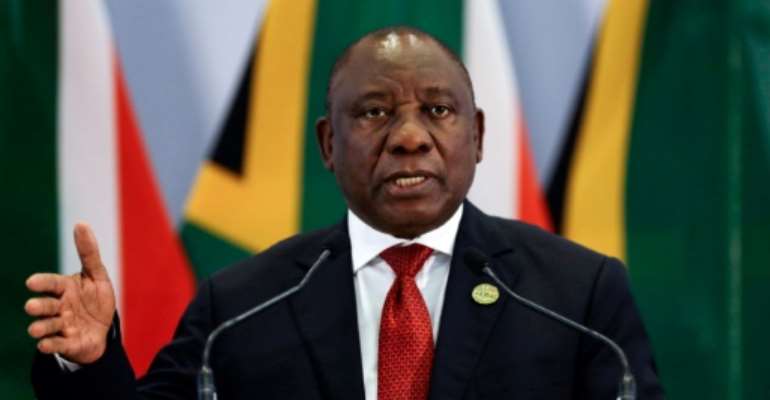 "It has become patently clear that our people want the constitution to be more explicit about expropriation of land without compensation," said South African President Cyrcil Ramaphosa. By Themba Hadebe (POOL/AFP/File)

South African President Cyril Ramaphosa said on Tuesday that his ruling party would seek to change the constitution to speed up redistribution of land to the country's poor black majority.

Much of the most productive land in South Africa is still owned by white people, 24 years after the end of apartheid which systematically disenfranchised black people.

White farmers control 73 percent of arable areas and it is widely understood to be that land which could be forcibly seized and transferred to the previously disadvantaged.

"It has become patently clear that our people want the constitution to be more explicit about expropriation of land without compensation," he said in a televised address.

"The (ruling) ANC will, through the parliamentary process, finalise a proposed amendment to the constitution that outlines more clearly the conditions under which expropriation of land without compensation can be effected," he added, vowing the change would "unlock economic growth".

The issue of whether to take land without compensating current owners is by far the most divisive and emotive issue facing modern South Africa with critics drawing parallels with Zimbabwe's disastrous reforms.

Until now the government has pursued a policy of "willing buyer, willing seller" to enable land transfer.

But in February lawmakers voted to establish a commission charged with rewriting the constitution to allow for forcible land transfers without compensation.

Observers have suggested constitutional reform is a ploy by the African National Congress (ANC), which has faced political pressure from the radical leftist Economic Freedom Fighters (EFF) party, to win votes in elections due next year.

"The intention of this proposed amendment is to promote redress, advance economic development and increase agricultural production and food security," said Ramaphosa.

He has previously endorsed land reform on the condition that it should not hurt agricultural production or economic output.

The ANC alone does not have the two-thirds parliamentary majority required to amend the constitution but would be able to pass changes with the support of the EFF.