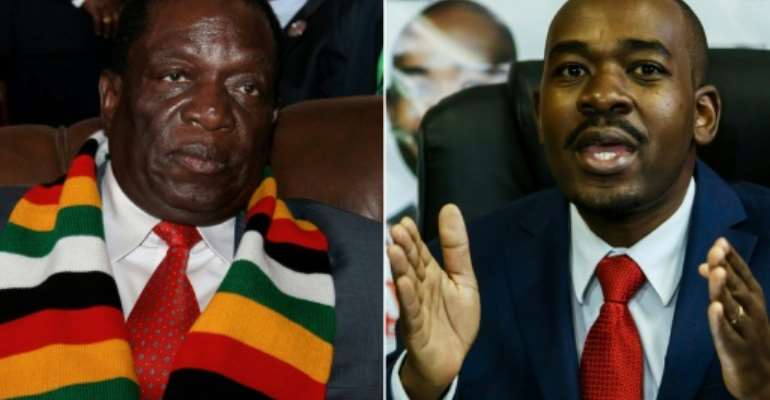 Zimbabwe's opposition MDC party on Tuesday claimed victory in the country's historic elections while the government threatened to jail leaders announcing results as the wait for official tallies dragged on.

President Emmerson Mnangagwa said information on the "ground is extremely positive" about his prospects of victory in Zimbabwe's first election since former leader Robert Mugabe was ousted in November after 37 years in power.

Their competing claims raise the prospect of fraud allegations and a possible run-off vote in September -- required if no candidate wins at least 50 percent of ballots in the first round.

A threat by a top Movement for Democratic Change official that the party would "announce our own results" apparently prompted Home Affairs Minister Obert Mpofu to warn that anyone doing so would "provoke the wrath of the law and risk being sent to jail".

Senior MDC veteran Tendai Biti had earlier said the party would release its own results if the vote did not go in favour of Chamisa.

"We have noted with concern the actions and conduct of some political party leaders... who are openly declaring that they will announce results irrespective of provisions of the law," Mpofu said at a media briefing in Harare.

It is an offence to announce poll results ahead of the Zimbabwe Electoral Commission (ZEC), he added.

The ZEC had earlier warned that the results of the presidential first round may not be known until Friday or even Saturday and would not be released until tallies were received from all 10,985 polling stations.

"We are nowhere near where we expected to be, so I can quite see us going into the fifth day which is allowed by law -- but we are working flat-out," ZEC chairwoman Priscilla Chigumba told a media briefing in Harare.

On Wednesday attention will shift to the European Union's electoral monitoring team which will deliver a much-anticipated report on the conduct of the polls and counting process.

Their findings will also be an important verdict on Mnangagwa, 75, who has staked his reputation on delivering credible polls since he took power last year.

"There are shortcomings that we have to check. We don't know yet whether it was a pattern," the EU's chief observer Elmar Brok told AFP during voting Monday.

Observers from the Southern African Development Community (SADC) and the African Union will also deliver reports on the polls.

Biti had earlier accused the ZEC of deliberately delaying the publication of results to help ZANU-PF.

"The results show beyond reasonable doubt that we have won the election and that the next president of Zimbabwe is Nelson Chamisa," Biti told a press conference at the party's headquarters in Harare on Tuesday.

There were no reports of clashes in stark contrast to elections under the authoritarian Mugabe that were mired by violence -- although police called on party leaders to encourage restraint among their supporters.

"We are however seriously concerned about evidence of interference... there is a deliberate delay in announcing the results. This delay is totally unacceptable," Biti added.

Analysts have said it was unclear whether the country's generals, who ousted Mugabe and ushered Mnangagwa into office, would accept an MDC victory.

Defeat for the ruling party would likely lead "to a denunciation of the election by the Mnangagwa administration and the potential for the military to intervene to secure power for ZANU-PF," the London-based BMI risk consultancy said. 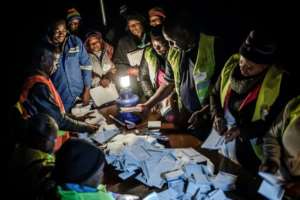 Vote counting went into the night in the suburb of Mbare in Zimbabwe's capital Harare. By Luis TATO (AFP)

"There is no way that ZANU-PF will accept an MDC victory. We know that people will be beaten -- especially in rural areas, like what they were doing before," said Harare shop worker Tracy Kubara, 26.

If required, Zimbabwe's 5.6 million registered voters would be asked to return to the polls to vote in a presidential run-off on September 8.

Mugabe, 94, voted in Harare alongside his wife Grace. That followed a surprise press conference at his home on Sunday at which he stunned observers and called for voters to reject ZANU-PF, his former party.

But Chamisa, 40, a lawyer and pastor who performed strongly on the campaign trail, sought to tap into the youth and urban vote.

High turnout of around 75 percent before polls closed on Monday evening could favour Chamisa.

He has repeatedly accused ZANU-PF and election authorities of trying to fix the result via a flawed register of voters, ballot paper malpractice and voter intimidation.

Whoever wins will face a mass unemployment crisis and an economy shattered by the Mugabe-era seizure of white-owned farms, the collapse of agriculture, hyperinflation and an exodus of investment.