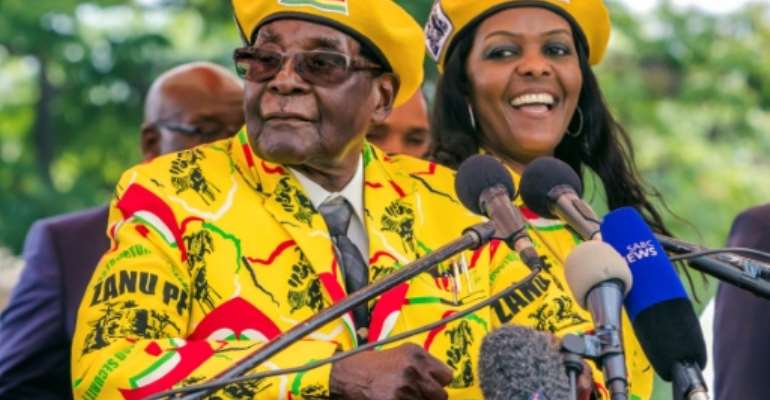 One of Grace Mugabe's last public appearances as first lady was at a rally in support of her husband, 13 days before his fall from office. By Jekesai NJIKIZANA (AFP)

A South African court ruled Monday that former Zimbabwean first lady Grace Mugabe did not have diplomatic immunity when she allegedly beat a young woman with an electrical cord.

Mugabe was given immunity from prosecution by officials after she was alleged to have become angry and beaten model Gabriella Engelsâ€š who had been with her sons in a luxury Johannesburg hotel.

Engels suffered cuts to her forehead and the back of her head during the alleged assault on August 13.

Judge Bashier Vally said the decision by officials at South Africa's foreign ministry was "inconsistent with the constitution" and struck it down.

Following the incident, police had vowed to prevent Mugabe leaving the country where she had been while her husband was on an official visit -- but backed down after the immunity decision. Grace left shortly afterwards.

The foreign ministry had said immunity in the case was important to maintain relations between South Africa and Zimbabwe.

"This is a great day for justice, the rule of law and shows that nobody is above the law," said party chairman James Selfe in a statement after the ruling at the South Gauteng High Court in Johannesburg.

"The South African government chose to put the politics of expediency above the rule of law."

The foreign ministry was ordered to pay legal costs in the case.

"We have noted the judgement, we are studying it, we will comment in a later stage if it is necessary," said foreign ministry spokesman Ndivhuwo Mabaya.

Mugabe did not comment on the ruling as she cast her vote in Zimbabwe's historic elections on Monday -- the first in which her husband was not a candidate.