Amissah-Arthur Was A Definition Of A Gentleman 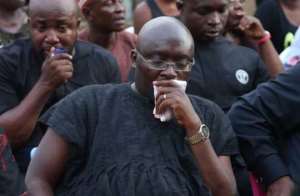 The Government on Friday paid a deeply touching tribute to the late former Vice President, Paa Kwesi Bekoe Amissah-Arthur, saying, his character and disposition was 'a soothing balm in the tempestuous waters of Ghanaian adversarial politics'.

He was a definition of a gentleman, an ideal politician, who never sought vengeance against his political opponents.

Also there were other high profile personalities including the Speaker of Parliament, Professor Aaron Mike Oquaye and Chief Justice Sophia Akuffo, present and past Ministers of State, Parliamentarians, Members of the Council of State, the Diplomatic Corps and the Clergy.

Vice President Bawumia said the government acknowledged the immense contribution to the late Amissah-Arthur to the governance and development of the nation.

The deceased contributed to the advancement of the country as a lecturer at the Economics Department of the University of Ghana, Governor of the Bank of Ghana and as Vice President.

'You served our nation in various capacities and the history of Ghana will not be written without your name. You played your part, and you played it well."

He added that the life of the late former Vice President should inspire everybody to love one another, embrace and fight for the development of the country.

He announced the decision to rename the Moree Senior High School (SHS) after the Late Amissah-Arthur - to honour his memory.

The late former Vice President collapsed during a workout at the Air Force Gymnasium in Accra, rushed to the 37 Military Hospital, and he pronounced dead, on Friday, June 29.

He also at different times served as Governor of the Bank of Ghana and Deputy Minister of Finance and Economic Planning.

He is survived by a wife, Matilda, two adult children, Kwesi and Araba.