One District One Factory Set To Takeoff In Gomoa Central District 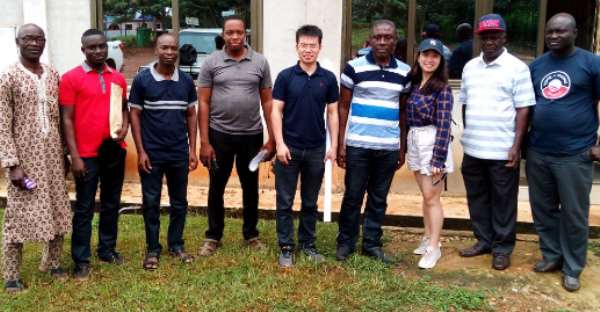 Chinese Officials In-charge of One District One Factory for Gomoa Central District in the Central Region have visited the Factory site to facilitate it's early commencement.

The Chinese delegation from Exim Bank inspected the site for the factory at Gomoa Osamkrom.

He noted that the District has vast land for cassava cultivation thus the decision to take advantage of government's One District One Factory policy to create jobs for the teeming unemployed people especially cassava farmers to market their produce.

Hon. Benjamin Kojo Otoo disclosed that the factory when completed would engage over 3,000 who would produce the raw materials for the factory.

" N'Adom Farms currently produces cassava flour for export but at a small scale. Partnership with the government through the One District One Factory would expand facilities and bring in modern machines to produce large quantity of cassava flour for local and International market.

This would enable the Factory to engage more than 10,000 cassava farmers in the District in a short possible time. Potential farmers are been sensitized on benefits they would derived from cassava cultivation.

Arrival of the Chinese delegation has rekindle our spirits. The Gomoa Central District Assembly would give all the necessary support for the factory to take off as early as possible"

The Managing Director of N'Adom Farms Limited, Dr. James Panford Arthur lauded government for the partnership adding it would boost production and create jobs in the catchment area.

He said expanding the equipment and facilities would increase workforce which would generate income for the nation.

The Member of Parliament for Gomoa Central constituency, Hon. Naana Eyiah Quansah was extremely happy that at long last a listening government led by His Excellency Nana Addo Dankwa Akufo Addo had heard the cry of the people in the District through job creation and innovation policies.

" Gomoa Central has over the years been associated with poverty and economic hardships. This factory when completed would lessen financial burden of the people by offering them jobs.

Our main occupation is farming so the cassava processing factory has not missed it way. Ready market for cassava farmers has been the main problem confronting the farmers so we say kudos to Nana Addo and NPP government.

The Liaison Officer for N'Adom Farms Limited, Alhaji Adam Seidu told newsmen that the company took advantage of the One District One Factory policy to apply to the partnership.

" Government accepted our proposal for the Partnership. We are proud of this policy and would work assiduously to create jobs for our people.

There are cassava producing communities like Gomoa Lome, Esikuma, Dahom, Osamkrom, Mangoase, Brofoyedur, Abaamkrom, Ekwamkrom, Jukwa, Manso and other areas that would produce enough raw materials for the factory. We are posed to create jobs to reduce unemployment and economic hardships in Gomoa Central District"

In a related development, the Gomoa Central District Assembly has inaugurated 11 Member Spatial Planning Committee to see to proper demarcation and land uses in the District.

According to the Presiding Member of the Assembly, Hon. Kweku Nyarko Koomson, their core mandate include proper land documentation and planning for developmental projects.

He stated that the committee would work with traditional rulers and stakeholders to ensure lands are secured for future development.

The committee shall ensure preparation of the structure plan and local plan in the District is in accordance with the local government act.

The Presiding Member further disclosed that the work of the committee would halt putting up of buildings and structures at unauthorized places.