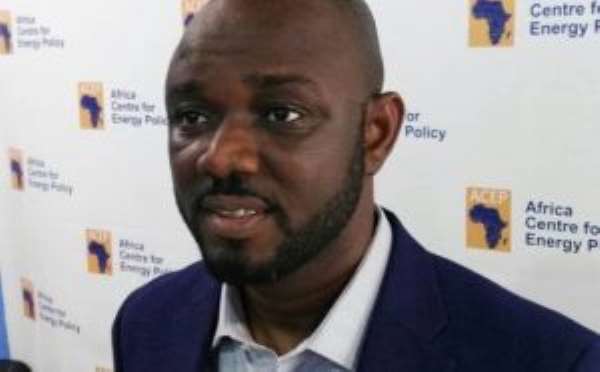 The Executive Director of the Africa Centre for Energy Policy (ACEP),Bernard Boakye, wants Parliament to reject the renegotiated AMERI deal.

Government on Thursday laid a fresh agreement before Parliament to amend the controversial 510 million dollar power deal approved by the House in 2015.

Mr. Boakye on Eyewitness News rubbished claims Ghana will be saved a whooping $400 million under the renegotiated deal, saying “We are committing to pay $50m for 15 years which is not on for the Ghanaian public and I hope Parliament will protect the public by rejecting the AMERI amendment,” Mr. Boakye said.

His comments come at a time when the Minority in Parliament has asked government to provide details on the cost of the amended agreement.

About the Ameri deal
The then opposition NPP was critical of the deal, and the Energy Minister, Boakye Agarko, claimed that it had been overpriced by 150 million dollars.

The NPP MP for Andasi-Asokwa, K.T.Hammond had earlier filed a motion for a rescission of the deal.

The Minority however staged a walkout when the Speaker forwarded the motion to have the deal rescinded in Parliament.

How calls for renegotiation started
The John Mahama administration in 2015 signed a contract with Africa and Middle East Resources Investment Group's (AMERI Energy) to rent the 300MW of emergency power generator from AMERI at the peak of the country's power crisis.

But according to the NPP administration, it found out that the government had been shortchanged by AMERI as they presented an overpriced budget, and were overpaid by $150 million.

The new administration thus commenced a renegotiation process to ensure value for money. But the NDC has repeatedly stated that the claims are untrue.

We gave Ghana best deal; but gov't can scrutinize – AMERI

The Africa & Middle East Resources Investment Group LLC (AMERI) has also stated that, its 2015 agreement with Ghana for the provision of a Power Plant in the heat of the country's power crisis, offered the “best value for money” despite government findings that the $510 million deal was bloated by $150 million.

“AMERI acknowledges that the Government of Ghana has every right to assess all public contracts for value of money or quality of delivery. The company strongly believes the project delivered on both. An independent report by renowned auditors PriceWaterhouse Coopers (PwC) found that, out of 7 similar projects, the Ameri plant at Takoradi offered the best value for money,” the statement said.