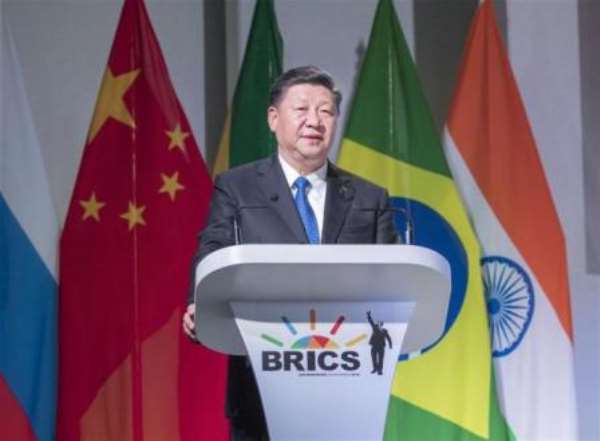 When addressing the BRICS Business Forum at the 10th BRICS summit in Johannesburg, South Africa, Xi lauded the outstanding contribution BRICS countries -- Brazil, Russia, India, China and South Africa -- have made to global economic recovery and growth in their first decade of cooperation.

The Chinese president shared his thoughts on the changes the world is going to witness in the coming 10 years, saying that the next decade will be a crucial one in which new global growth drivers will take the place of old ones, seeing faster changes in the international landscape and the international alignment of forces, and witnessing a profound reshaping of the global governance system.

"We BRICS countries should keep abreast of the historical trend, seize development opportunities, jointly meet challenges, and play a constructive role in building a new type of international relations and a community with a shared future for mankind," Xi said.

"A trade war should be rejected, because there will be no winner," Xi said. "Economic hegemony is even more objectionable, as it will undermine the collective interests of the international community; those who pursue this course will only end up hurting themselves."

He said that BRICS countries should firmly promote an open world economy, be resolute in rejecting unilateralism and protectionism, promote trade and investment liberalization and facilitation, and jointly steer the global economy toward greater openness, inclusiveness, balanced growth and win-win outcomes for all.

BRICS countries should also increase input in innovation, replace old growth drivers with new ones, advance structural reform, and boost international exchanges and cooperation in innovation, so as to enable more countries and people to benefit from scientific and technological advances, Xi said.

On inclusive growth, Xi said: "We should strengthen cooperation with Africa, support its development and make BRICS-Africa cooperation a model for South-South cooperation."

Speaking of global governance, Xi said BRICS countries should uphold multilateralism. He urged all parties to fully observe collectively adopted international rules, and treat all countries as equals regardless of their size.

"Obviously, the current international order is not a perfect one. But as long as it is rule-based, aims to be equitable and pursues win-win outcomes as its goal, such an international order should not be discarded at will, still less should it be dismantled and rebuilt all over again," Xi said.

OPPORTUNITIES OFFERED BY CHINA
Noting that this year marks the 40th anniversary of China's reform and opening-up, Xi told the audience that China has blazed a path of building socialism with distinctive Chinese features, and has also made important contribution to peace and development of mankind while pursuing its own development.

"We will take an active part in South-South cooperation to foster greater opportunities for common development of emerging markets and developing countries," Xi said.

China will continue to develop itself with its door wide open, build a more investment-friendly environment, strengthen protection of intellectual property rights, increase imports, and vigorously pursue the Belt and Road Initiative to create new opportunities of social and economic development for participating countries and for them to implement the United Nations 2030 Agenda for Sustainable Development, Xi said.

China will host the first China International Import Expo in Shanghai this November, a major move to firmly support trade liberalization and open its market. The Expo will serve as a new platform for the world to access the Chinese market.

By now, over 130 countries and regions and more than 2,800 companies have confirmed participation and over 150,000 buyers in and outside China are expected to attend this fair, Xi said.

This coming September will see a reunion of China and African countries at the Summit of the Forum on China-Africa Cooperation (FOCAC) in Beijing, Xi said, noting that this summit will enable China and Africa to pursue high quality and high standard cooperation for mutual benefit and common development.

"China and African countries are destined to be good friends, good brothers and good partners, and China-Africa cooperation stands as a fine example of South-South cooperation," the Chinese president said.

In his address, Xi also recognized the role of the business community in BRICS economic cooperation, calling on business leaders to contribute more to shaping the second Golden Decade of BRICS cooperation.

Quoting one of the famous sayings of Nelson Mandela, Xi pointed out that the history of BRICS cooperation is a journey of the five countries climbing great hills only to reach new heights.

"I am convinced that when our five countries forge ahead together, we will scale new peaks, reach new heights, and make even greater contribution to peace and development of mankind," he said.