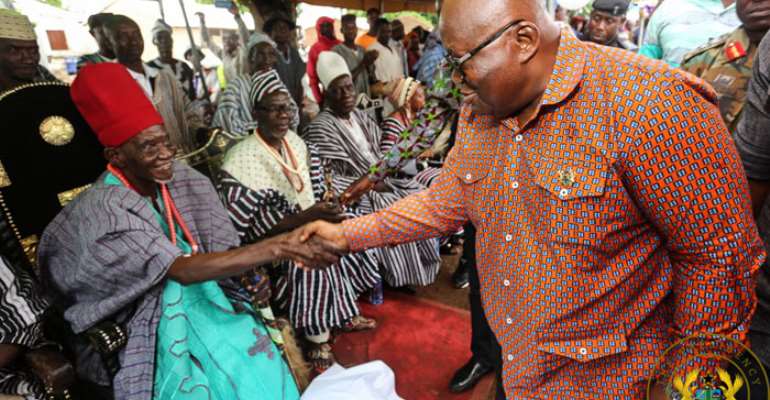 Chiefs in the Upper West Region have expressed appreciation to President Akufo-Addo for fulfilling his manifesto pledges and implementing several pro-poor policies over the last 18 months.

Speaking on behalf of chiefs from Jirapa, Sissala East, Sissala West, Nadowli/Kaleo, Daffiama-Bussie-Issah and Wa East on Wednesday, which marked the end of the President's two-day visit to the region, Naa Puowele Karbo III, Paramount Chief of the Lawra Traditional Area, indicated that the decision taken by President Akufo-Addo to interact with them showed “the respect and love you have for chiefs and the institution of chieftaincy at large.”

He added that “we are very elated, Your Excellency, for upgrading Lawra, Jirapa, and Tumu districts into municipality status, as part of your commitment to bring democratic governance to the level of our people.

“It was a timely move, and it is anticipated that they will serve as growth poles to propel development within our corridor and further pull along surrounding districts socio-economically. We are proud of you.”

The Lawra Naa also commended the Akufo-Addo administration for the commitment, speed and zeal with which it is rolling out its campaign promises to improve the lives of the citizens.

“They include the One District, One Factory, One Village, One Dam, Free SHS, Planting for Food and Jobs policies, and also creating employment for the youth through the Nation Builders Corps (NABCO). I am most delighted with the support for cashew plantations which will facilitate afforestation, owing to the fact that the desert is fast closing in on the region, as well as empowering the population economically,” he said.

The Lawra Naa continued, “We also commend the other interventions being implemented by your government to stimulate the economy. These include tax reliefs, electricity tariff reductions and abolishment of so-called nuisance taxes to ease pressure on business, and bring relief to ordinary Ghanaians. This is, without doubt, the quality leadership required for the attainment of your vision of a Ghana Beyond Aid.”

He urged all qualified youth in the Upper West Region “to take advantage of all the above-mentioned policies of government to improve on their socio-economic status, and thereby stem the massive migration of our youth down-south in search of non-existent jobs.”

Naa Puowele Karbo III assured President Akufo-Addo that they (traditional leaders) would continue to give their candid advice and support and partner government in the implementation of its policy initiatives to bring about the much-needed development to Ghana.

“It is common knowledge that our people are predominantly farmers, operating within a one-season rainfall regime, usually followed by a very long dry season. It means that for half the year, our people have nothing to do, leading to large-scale migration to other parts of the country,” he said.

“The One Village, One Dam policy is the solution to all-year agricultural production in the region. We are anxiously awaiting the rollout in the selected communities in our region. With regards to the rural industrialization of our region, we see the current efforts to promote the cultivation of cashew, shea and mango as critical to its takeoff.”

The Lawra Naa urged President Akufo-Addo to create a Shea Development Board with renewed mandate to develop the shea industry and indicated that the Northern Development Authority could see to its realization.