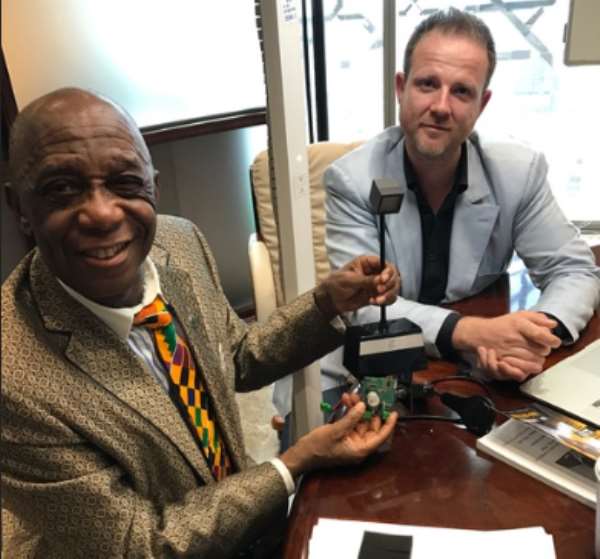 The Famous Fiber Optics Inventor Dr. Thomas Mensah attended a Board Meeting in Dubai where the Technology that will replace WI-FI is being demonstrated by a Company called Zero1. This Company is one of the world.s leading developer of LI FI Technology which uses light instead of wireless to connect computers and devices. Dr. Mensah is on the Board of this company. Other Board members include Jacky Fleschen

Chairman and Marc Fleschen Chief Executive Officer who manage the company with offices in Paris, Atlanta and Headquartered in Dubai. They are French Citizens who now reside in Dubai. Major players in LI FI include Apple Inc, and Samsung who want to stay on top any technological advances that will replace WI FI as we know it. Major Telecommunication Firms like Orange also have jumped into this Field.

The Technology is attracting attention because like Fiber Optics, No one can hack data that is transmitted using LI FI. In the demonstration WI-FI was disconnected and LI FI was used to access data online including Google and Facebook Data. Dr. Mensah using this technology displayed the Map of Ghana on a large screen as well as on a lap top. The Secure Communication and transmission of information using LI FI has expanded the application to the Military, Cyber Security Agencies, Hospitals, and even Airports where current WI-Fi use is extensive and prone to Cybersecurity issues..

In Japan the LI FI technology is being integrated into Tool Manfacturing where machines use light 7 meters above for machine to machine communication, Maintenance etc. These machines are connected to Cloud using LI FI for smart manufacturing.

Dr. Mensah also attended Board Meetings on MAGLEV the next generation of Rail Technology. This is the Technology being demonstrated by Japan, China, France and Germany where Superconducting Magnets are used to propel trains that float on the tracks to speeds exceeding 400 miles per hour. There is a bold International MAGLEV initiative that the Dubai group is working with Dr. Mensah. Dr. Mensah holds pioneering patents in Fiber Optics and Internet of Things Technology (IOT), and has authored 4 Books on innovation including Superconductor Engineering, 1992 which describes MAGLEV , Fiber Optics Engineering , 1987 and Nanotechnology Commercialization 2017. He is a Fellow of National Academy of Inventors, USA, a Fellow of American Institute of Chemical Engineers, a Fellow of Ghana Institute of Engineers and Associate Fellow of the American Institute of Aeronautics and Astronautics. He is also the Founder and Chairman of Silicon Valley of Ghana, www.Siliconvalleygh.com which he launched at the Kofi Annan Center in Accra recently..