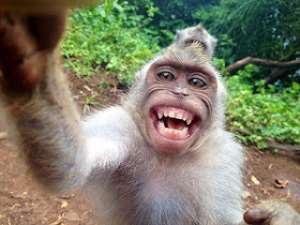 In May 1986, retroviruses which were identical with the STLV-IIImac (SIVmac) of the captured rhesus monkeys, were indicated in leprous, but otherwise healthy, Cebus monkeys in the Primate Research Center, New Orleans, and also in those rhesus monkeys which had been transplanted with the lepra-tissue from these Cebus monkeys and which subsequently suffered from Aids.

In July 1986, fourteen out of the fifteen Cebus monkeys captured and examined carry this SIVsmm-virus without showing any clinical symptoms. It is known whether it is the same as SIVmac-251.

In Jube 1989, three years after the description of the retroviruses (SIVsmm) in captured healthy Cebus monkeys in the USA research centers, the head of the research team, P.N. Fulz, maintained that these viruses had also been isolated in Cebus monkeys, living wild in West Africa.

Silence about the numbers, place and time of this evidence, but this alleged occurrence outside research centers together with an alleged extensive spread of HIV-2ROD (=Cape Verd occurrence) amongst people in West Africa was said to be an indication that 30 to 40 years ago, retroviruses from a Cebus monkey must have penetrated a human organism and then had transformed itself into the HIV-2 retroviruses.

As an alternative, the USA scientists state that HIV-2ROD had passed from human beings to monkeys and had changed in the latter. They did not even discuss the possibility that HIV could have been transmitted by insects, parasites, birds, fishes, by sea-men and tourists to people and animals in West Africa.

How could human beings infect monkeys with HIV? Till now, there is no indication whatsoever that West African Cebus monkeys living in the wild, consume intravenous drugs, transfuse untested blood pints, use contaminated blood products, or frequently use unsterilized injection syringes.

These possibilities explaining infection with the human virus obviously do not apply to animals. Since human beings do not bite monkeys, the research authors impertinently expect us to believe that transmission from human being to an animal occurred between a West African person and a wild 24-inch tall monkey.

How could human beings have acquired SIV from a monkey? Since of the 15 million pr so HIV-infected persons, there is not a single case of transmission via saliva (the exception was supposed to be a dentist from the USA), or through biting.

This possibility must also be rejected for West Africa with regard to transmission from an animal to a human. Here too, we will have to imagine the transmission of the SIVsmm from a little monkey to a West African person as a hurlyburly circus stunt on top of a tree.