Can You Imagine A World Without OPEC?? 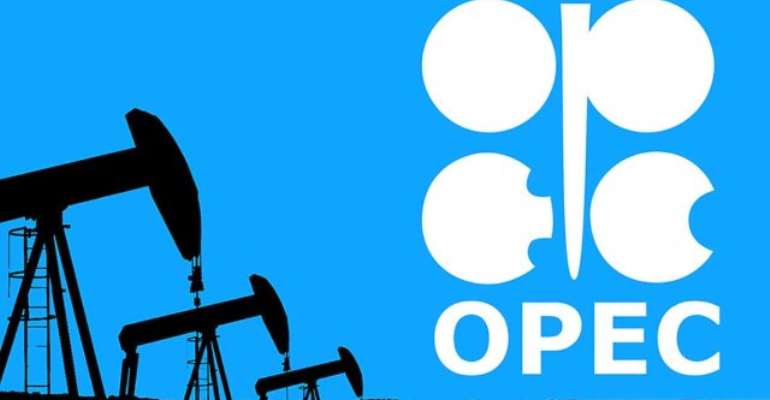 Imagine a world without OPEC. This is what the sponsors of legislation introduced in both houses of Congress seem to want. Versions of the “No Oil Producing and Exporting Cartels Act,” or the NOPEC bill, are working their way through the Senate and the House of Representatives, and are likely to find much more support from the White House than they have in the past – Presidents George W. Bush and Barack Obama both threatened to veto similar legislation.

The bill would allow U.S. antitrust laws to be enforced against OPEC members whom the sponsors say have "used production quotas to keep oil prices artificially high."

This is a popular argument in a country where the right to cheap gasoline might have been written into the constitution alongside the right to bear arms, had that document been drafted a couple of hundred years later than it was. But we need to look a bit further than the gas station forecourt. And when we do, we will not be looking upon the promised land.

OPEC introduced production quotas in 1982, to allocate output between member countries faced with a third year of falling global oil demand and rising supply from countries like Mexico and India, which left them with as much as 12 million barrels a day of spare capacity.

Saudi Arabia had already reduced its oil production by 30 percent and, just as in 2016, was no longer prepared to shoulder alone the burden of balancing oil supply and demand.

What would have happened if OPEC hadn't got together? Sure, drivers in America and elsewhere would have enjoyed cheaper gasoline for a while. But probably not for too long. Even with the group’s supply management, oil prices reached a low of around $14 a barrel in 1986, according to data from BP Plc.

How much further would they have fallen if member nations had continued to produce without restraint? Certainly low enough to make production uneconomic in Alaska, the Gulf of Mexico, the North Sea, Western Canada and a host of other oil provinces that have become mainstays of non-OPEC production.

The group’s supply management created the space for 33 billion barrels of additional non-OPEC production in the 20 years it took for them to get their supply back to the level it had been in 1978.

But nearly 40 years later, the world's a different place. Here is what would happen if the NOPEC bill became law and the group failed to protect itself from its reach. This would be the world without OPEC.

There could be no collective action to try to balance oil supply and demand. Saudi Arabia has said repeatedly that it wouldn't balance the market on its own and support high-cost oil producers.

You don't have to search too far to see what that means in practice. Just cast your mind back four years, during the thick of OPEC's pump-at-will policy. Oil prices fell to $26 a barrel – great for drivers, but not so good for the U.S. oil patch, or for investment in future production capacity needed to offset natural decline in existing fields. Careful What You Wish For

The ending of Saudi Arabia's output restraint had a devastating impact on the U.S. oil patch 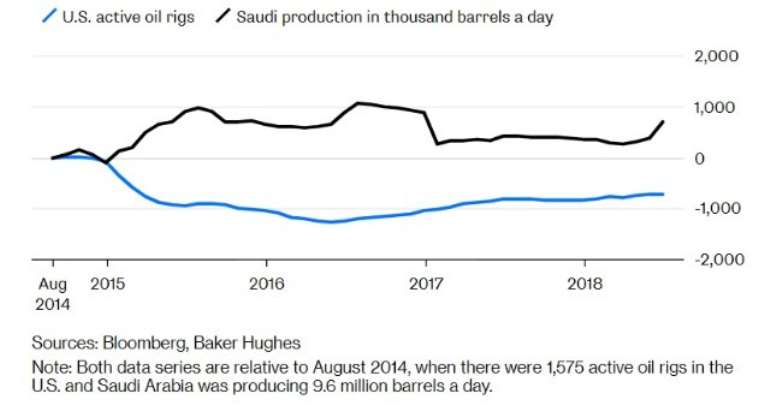 Note: Both data series are relative to August 2014, when there were 1,575 active oil rigs in the U.S. and Saudi Arabia was producing 9.6 million barrels a day.

As Saudi Arabia raised its production, the number of rigs drilling for oil in the U.S. fell by 80 percent. The only region in the world where drilling didn't drop was the Middle East. It wasn't long before there were calls, including from candidate Trump's energy adviser, for OPEC to act to reduce supply and rescue prices that were too low for the American shale industry.

If the NOPEC bill becomes law, there’s little incentive for anyone to hold spare production capacity. In recent decades this willingness has been an important safety valve to relieve the pressure of supply disruptions.

A study by the King Abdullah Petroleum Studies and Research Center, initiated in 2016, assessed the annual economic benefit to the global economy of OPEC's spare production capacity at between $170 billion and $200 billion through the reduction in price volatility in times of supply disruption. Without that buffer, oil prices could have spiked above $300 a barrel during the Libyan revolution, the study found.

The biggest consumer-held oil stockpile – the U.S. Strategic Petroleum Reserve – could not have coped with the loss of supply that accompanied Iraq's 1990 invasion of Kuwait, and it would have struggled to offset the loss of Libyan production in 2011 for more than five months.

The loss of supply that may result from Trump’s revival of sanctions against Iran would exceed the reserve’s ability to deliver within four months.

Insufficient Petroleum Reserve
After three months the SPR could not have coped with the loss of oil supply from Iraq's 1990 invasion of Kuwait. After four months, it won't be able to cope with losses from sanctions on Iran 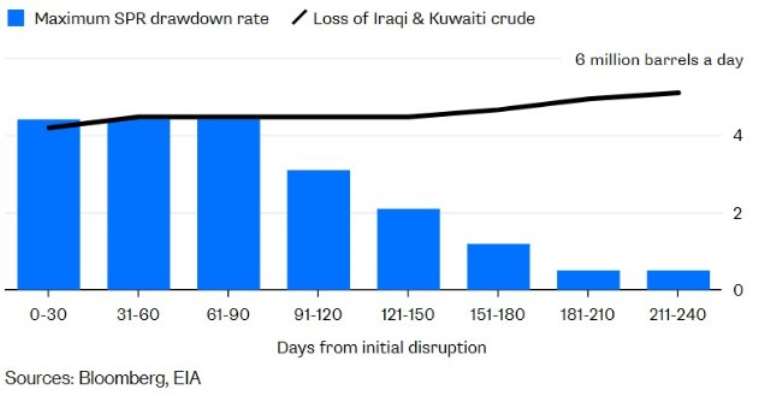 It seems perverse to be attacking President Trump’s ally against Iran and the world's only source of spare capacity, while simultaneously initiating the biggest supply disruption in nearly 30 years. But attacking allies and destabilizing markets seems to be a favorite pastime in Washington these days.

Savannah: NADMO to clear buildings on waterways after heavy ...
37 minutes ago