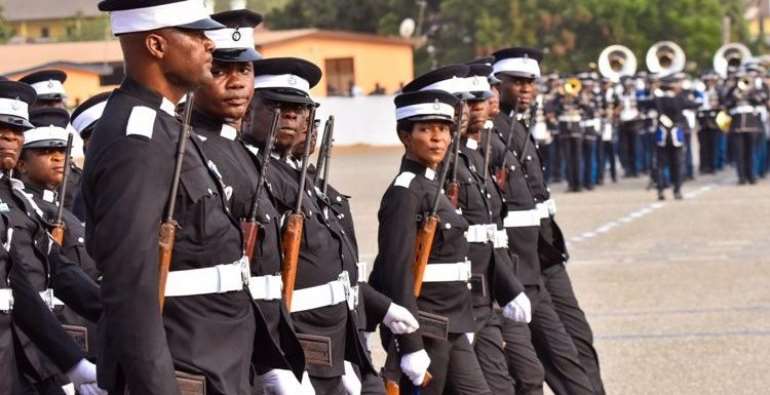 IN TIMES like these, GHANAIANS are not balanced in their senses of judgements, fair and objective in their views and opinions, naturally bias and tilted against the ordinary police officer particularly in this era of loud feminism campaigns and massive wakes of human rights calls. So, the ordinary police officer ought to live above reproach, and shouldn't allow the police service to sacrifice him to cover up their ineffectiveness and inefficiencies to please the general public.

These things are happening on the increase because the police officer is not psychologically prepared to carry out his duties coupled with wrong orientations police officers still receive at the various police training schools though times have changed greatly, and society is ready to put the police to check. Only God knows frustrations police officers go through to perform their duties so we only plead with Ghanaians when things go wrong whilst risking our lives to protect them and their properties. We are doing very much with very little given to us in terms of training and orientations to suit modern and contemporary policing.

The police service itself abuse greatly the rights of its personnel so, it becomes a bit strange to some of us when they pontificate suddenly and take the lead to call for respect of human rights. Charity must first begin from home. They should first respect and uphold the dignity of their men and some of these brutish assaults on civilians, particularly women and children by the police will naturally reduce, if not completely stopped. They should first protect police officers from gruesome killings in the hands of armed robbers and defend the police when the soldiers go on rampage attacking them.

The ordinary police officer must not allow himself to be turned into a SCAPEGOAT as the case of this police officer who is caught on camera abusing a woman with a child in a banking hall is naturally turning into. He is automatically pronounced guilty and condemned to death by hanging in the court of public opinion with flared sentiments though the principles of "audi alteram partem" must be adhered and upheld in all cases including that of murderers and robbers.

Society is becoming increasingly provocative and daring under the pretexts of gender, feminism and human rights advocacies so, the police officer should personally reorient himself because the police service has nothing to offer him to be in the right position to stay above situations that can drag him into serious disreputes in order to avoid the same police service scavenging him when there is a breach in the course of discharging his duties. In these times, the police officer must be very discretional and execute actions that he can justify, most especially when force is applied, and if it involves women and children who are captioned and tagged as VULNERABLES.

Suddenly the police administration is releasing press statements and ordering for the arrest and detention of this police officer but the fact is that current modules of instructions at the various police training schools in Ghana lack the right feminism, gender, human rights and democratic orientations to put the police officer in the right frame of mind to discharge his duties professionally. We only question the professional sense of the police when there is a breach in the course of discharging their duties but the police officer also needs constant hunger management and psychological therapies to rightly equip him to be very discretional with application of force, if it involves women and children.

In Ghana, the police officer is not professional because he is trained to be professional and those police officers who exhibit some high standards of professionalism are self made. They upgraded themselves to be abreast with time and modern police practices all by themselves but not because the police service made them so. The police service itself is seemly misocaenic as personnel are frustrated and at times transferred just to truncate attempts for police officers to upgrade their knowledge to stay afloat high tides of gender, feminism and human rights advancements. The police service is being run on very obsolete structures with serious resistant to attitudinal change right from the top to bottom so Ghanaians should brace themselves for more these in coming days.

Why won't both the police administration and the government team up to draw modern modules of training curriculum to give the police officer the right orientations to do his work to avoid some of these unfortunate happenings that sink the already battered image of the police further into the quagmire? This is the results we get for assuming that the police officer must discharge himself dutifully just for the mere fact that he is a trained police officer who went through basic training for at least 6 months and wears probably black or blue-black uniform with GHANA POLICE inscripted on it.

Is the basic 6 to 9 months training which is largely full of drills and fatigues enough to equip the police to stand the tests of gender, feminism and human rights advancements? Copiously NO. Once the police officer walks out from the training school after the basic training, that is the end of it all as far as training and orientations are concerned. What we need to know is that society is fast changing and developing so people expect higher and professional standards of police practices and not brutalities that went on during the revolutionary days. Democracy and respect for human rights have come to stay but Ghana Police Service is still obsolete and lacking behind when it comes to the right democratic and human rights orientations.

Whatever we are seeing today, whether police are killing suspected robbers unjustifiably or not, the police officer is drunk with AK47 riffle on board troski and the most recent one where the police officer is caught live on camera punching a woman with a child are all end product of the kind of training we undergo and the wrong orientations we have received at the training schools in democratic dispensation. Until the police officer is continously trained and retrained to sharpen his delivery skills, more people will be killed unjustifiably and lot more brutalised just like what we saw at the Midlands loans and savings banking hall on camera.

Suddenly the interior minister, the gender minister and well opionated persons and professionals in Ghana as usual have invaded the media space to run political and social commentaries but the fact is that, it is time to scrutinise the police orientations and the kind of training they have been undergoing though to ascertain whether it meets standards of modern police training and contemporary policing. Until that is done, we are likely to see more of these breaches which further sink the image of police and also put both the police and society at risk.

This makes me also to think whether gender and social protection is all about women and children because I have never heard the gender minister commenting on the gruesome killings of police officers by armed robbers. Don't police officers also need social protection in the wakes of massive attacks on police stations and rising attacks on the lives of police officers? What a BIAS and UNFAIR country of ours that we call Ghana which only see the flaws of the police but turns a blind eye to police when their lives are being squeezed from them by robbers because the state has failed woefully to protect the police and accordingly resource him with the right orientations to discharge his duties professionally?

The IGP and his administration, the gender minister, the interior minister, the president and all the politicians as well as our security experts and all well opionated persons and professionals who are suddenly calling for the heads of police officers in times like these know the right things to do to resource police officers with the right orientations and training to be up to task but you know what? Our leaders are not honest. Some of these happenings in the police are result of massive political interferences in the police but the same people turn around to castigate the police at the least opportunity. How sad!

Now, to we the "SANKWAS" in the police service who are on the front lines of all the deadly and "bonga" duties, have we all seen how the bank people have AREMEYAWED and ANASED the police officer? The police officer is never a hero in Ghana so it's time to be very discretional as a police officer particularly in these perilous times when society is microscoping every police act. Don't be a victim of systemic failure like our colleague Frederick Amanor though we can condemn his act but still people, including police officers should first cast the stone if they are not guilty of the same sin?

The same bank people called him to come and remove the woman from the banking hall and when it turned out to be very violent between the police officer and the woman, they secretly filmed the police officer who thought he was pleasing the bank staffs and the manager. When it came to the domain of the media and general public, the same bank issued a statement to condemn the actions of the police officer and reaffirmed their commitments to customer satisfaction even though the bank, I hear is the verge of collapsing.

These days there is always a civilian somewhere or anywhere ready to film the police officer so we should naturally assume that we are being watched by 3rd and 4th eyes somewhere and anywhere and that, we are likely to be called upon to justify our actions most especially if it involves the use of force as the case of this police officer may be. Don't be caught up in the web before you struggle to free yourself.

We must all condemn the conduct of this police officer but the principles of "audi alteram partem" must strictly be adhered and upheld.