Cop’s Brutal Attack On Woman: The Inside Story 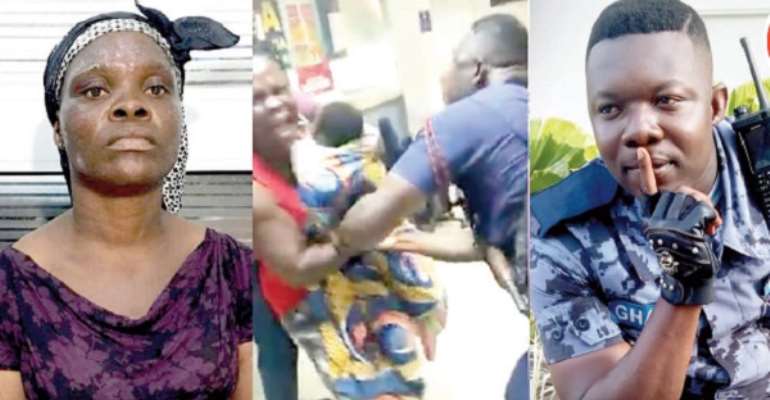 Patience Osafo, A scene from the video and Frederick Amanor Skalla

President Akufo-Addo has commented on the unfortunate assault of a woman carrying a baby by a policeman in Accra recently that has sparked outrage across the country.

A video of a policeman manhandling the woman carrying a two-month-old baby went viral on social media last Friday.

The victim was later identified as Patience Osafo.
The incident happened at the Shiashie branch of Midland Savings and Loans in Accra where the victim had gone to withdraw money from her account.

Support from kind-hearted Ghanaians has started pouring in for the woman, who is taking care of her grandchild.

The Inside Story
According to Patience Osafo, the incident occurred after she had visited the savings and loans company to withdraw her money.

Patience Osafo, who disclosed that she was carrying her grandchild, explained that she went to Midland on Thursday, July 19, 2018, to withdraw an amount of GH¢270 but they kept giving her excuses.

She said that the Midland had recently been rocked by panic withdrawals by customers.

Midland later attributed the incident to network problems from its service provider, K-Net.

However, K-Net has rejected the claims, saying that it did not receive any complaint about poor service for the financial institution.

The 36-year-old woman told UTV on Friday a day the video went viral that she has three children- her first born being a girl aged 17 and the second one, aged 9.

She said her 17-year-old daughter who is an epileptic patient got pregnant after she was raped by an unknown man at the age of 16.

According to her, she sells candies at Spanner Junction close to Accra Mall.

She said she started saving with the Midland Savings and Loans two months ago with hope of getting a loan in the near future to expand her business.

Patience Osafo narrated that the bank's officials tried to lure her to forget about her harrowing ordeal at the hands of the policeman after the incident.

“I went to the Midland Savings and Loans branch at Shiashie last week to withdraw part of my savings with them to enable me to buy baby food for my grandchild but the bank told me that the network was down and asked me to come the following Monday.”

She said the financial institution attributed its inability to serve her to network problems since last Monday.

“I became furious and decided not to leave the banking hall on Friday until I got my money.

“I got there at 7:30 am and decided to wait up until 4pm because I needed the money desperately to buy food for my grandchild, pay for a GH¢30 loan I took from someone who paid for my child's exam fees.”

“After the severe beatings, the management of the bank then came out to beg me to forget about the incident and then handed over the total amount of GH¢270 to me,” she claimed.

On Friday, July 20, the video went viral on social media, causing public outrage over the brutality meted out to the woman.

President's Condemnation
President Akufo-Addo, who is currently touring the northern part of the country, said at Nalerigu on Saturday that he was in total support of the Police Administration which is instituting disciplinary action and possibly criminal action against the policeman who is currently in police custody.

“Yesterday we had some very bad news in Accra – police beating up a woman who had gone to get money at the Midland Loans and Savings Company. I want to say here: policemen are meant to protect citizens and not to assault citizens,” the President said.

He added: “The measures that the IGP has taken to sanction the erring policeman and to make sure these don't happen again, have my complete support. I support 100 per cent the measures he has taken so that we can stop these incidents from proliferating.”

Police Action
Immediately the video went viral on social media, the Ghana Police Service issued a statement, through its Director of Public Affairs, DSP Sheilla Kessie Abayie-Buckman, to condemn the behaviour of the policeman.

The police said they had already commenced investigations into the case.

“Following this conduct, the Police Administration has issued a stern warning to all police officers, reminding them to desist from any such human rights abuses and misconducts, and the outcome of the investigation will be published.

Many institutions and civil society organizations have been issuing statements to call for swift action against the policeman since the incident hit the media.

The Ghana Bar Association (GBA) said “it had viewed with horror and revulsion a video circulating on social media in respect of an incident which allegedly occurred at a financial institution in Accra.”

It said it was concerned that a police officer, whose primary duties include ensuring the safety of persons, should brutalise the very persons he is duty-bound to protect, with such impunity, saying “the Bar condemns, in no uncertain terms, the reprehensible and cruel conduct of the police officer.”

The GBA noted that security officers, who under the guise of maintaining peace and order, attack, abuse and dehumanise people must not escape the law and victims of such brutalities must receive justice.

Gender Ministry
The Ministry of Gender, Children and Social Protection also condemned the errant policeman, saying “the content of this video is very heart rending and nauseating.”

“The Ministry cannot fathom what crime the nursing mother could have committed to warrant the violent and vicious attack by this officer of the law. Most disturbing, however, was the attitude of the persons who were in the banking hall and made no attempt whatsoever either to restrain the deranged policeman or to protect the hapless woman.”

The statement, signed by the sector minister Otiko Afisah Djaba said “the Ministry is concerned about the rising incidence of violence affecting vulnerable members of the Ghanaian society like women, girls, children, the poor and the disabled. Once again, the Ministry is exhorting all leaders of society to support the Ministry to inculcate the virtues of love and care for the weakest and most vulnerable in our society.

“It's our expectation that this behaviour will be dealt with in consonance with the laws of Ghana, and the sanctions announced publicly to serve as deterrent to other rogue policemen.”

Wicked Cop
Lance Corporal Amanor is believed to hail from Kpong in the Odumase–Krobo Municipality in the Eastern Region.

He attended Yilo–Krobo Senior High School (SHS) at Somanya and completed in 2005.

He served as a pupil teacher for sometime before getting enlisted into the Ghana Police Service.