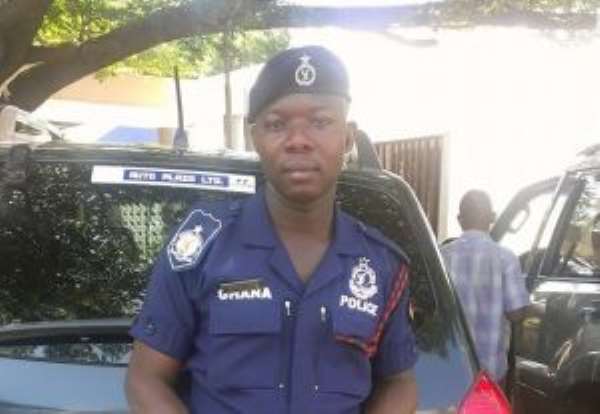 Lance Corporal Frederick Amanor, the Police Officer captured on video beating a client of Midland Savings and Loans Company is expected to be arraigned today [Monday].

Frederick Amanor was arrested on Friday after the video of the police brutality went viral on social media.

The incident sparked public outrage and drew condemnation from Amnesty International, Ghana Bar Association, the Ministry for Gender Children and Social Protection and a number of civil society organizations.

The woman, Patience Osafo, was reportedly trying to withdraw money after office hours due to frustrations from the bank.

She was assaulted by a police officer for refusing to leave the banking hall of Midland Savings and Loans with her grand child.

Patience Osafo subsequently lodged a formal complaint at the Legon Police Station after she was led to do so due to the huge public interest in the case.

A statement from the police on the matter said that all applicable charges will be preferred against the officer.

Already, Frederick Amanor has been interdicted and his uniform and all other police accouterments taken from him, pending internal disciplinary proceedings.

In addition, an investigation has commenced into the conduct of officials of the Midland Savings and Loans limited.

President Nana Akufo-Addo has said he supports fully any sanction the Police administration will take against Frederick Amanor to serve as a deterrent to other officers.

“The measures that the IGP has taken to sanction the erring policeman and to make sure these don't happen again, have my complete support. I support 100 percent the measures he has taken so that we can stop these incidents from proliferating.”

Calls for transparency
Amnesty International Ghana has threatened to protest along with other Civil Society Organizations if the Ghana Police Service does not make its report on investigations into recent incidents of police brutality public.

Amnesty International’s list of incidents includes the battery of Patience Osafo and the killing of seven men believed to be armed robbers in Ashanti Region last week.

The Country Director of Amnesty International, Robert Akoto Amoako, said “if we don't get the report after the investigations on the reported issues, it will appear the police have some impunity issues…. This time, all CSOs are going to come together and we are going to go on the streets if they don't do something about this and bring out the report.”