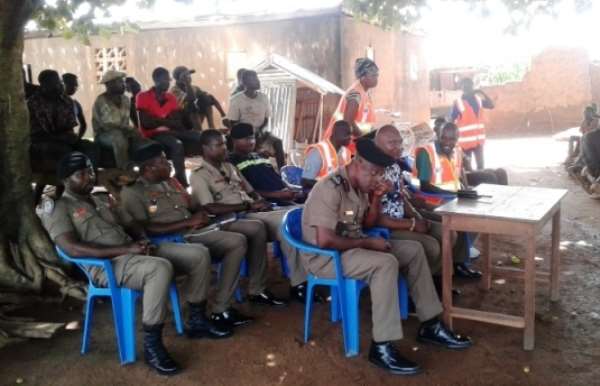 The exercise is targeted at educating communities to understand and sufficiently prepare themselves to avoid imminent flood related disasters and its aftermath effects as the rains intensify.

Officials described the public education programme as a national security one when they met the people of Yali-Yaru community in the Nadowli-Kaleo District on Friday.

The Deputy Chief Fire Officer (DCFO), Mr Kwaku Manu Afful who is Director of Operations at GNFS headquarters said the workout session aimed to sensitise communities on the dangers of living around or farming in flood prone areas.

It was also to help the state officials to assess the disaster preparedness of various Metropolitan, Municipal and District Assemblies (MMDAs) in the region.

Naa Danwaa Musah Kuonbayaa, the Chief of Yali-Yaru community recounted how their food crops along the banks of the Black Volta River were washed away by the floods last year, inflicting hunger and suffering on communities there.

Only that portion of their land was fertile, he said, but due to the danger they had abandoned the area this year and now engage in backyard farming.

He projected the people would continue to suffer because they did not get enough acreage of farmland to be able to sustain their families and appealed to government, benevolent organisations and philanthropists for support.

NADMO and GNFS commended the people for abandoning their farms along the area this year, saying it was better not to farm there than to do it and later lose their lives and resources to floods.

At Kul-ora community in the Jirapa District, the team was amazed to see several farms planted with crops such as rice, maize and guinea corn among others being drenched in flood.

The community appeared helpless and were aware of the dangers but continued do farm along the flood prone area because they did not have any other land to farm.

Mr Isaac Seidu, the Upper West Regional Director of NADMO, expressed sadness seeing the danger the communities were exposed to despite continued sensitisation against farming in flood prone areas.

The team also visited Dipke and Bagri rivers both in Lawra Municipal where, they advised communities against building and farming along the river banks.

Mr Daniel Yirzuu, Assembly member for Bagri Electoral Area said members of the community living around the banks of the Bagri River were willing to relocate but needed some form of support from central government to put up housing facilities.

At Nandom, the team could not reach one of the floods prone areas as the road and some farms around were flooded making their determination to get to the target area a huge risk.

Mr Aasoglenang Thaddeus Arkum, the Nandom District Chief Executive (DCE) said there were about 46 flood prone communities in the district, but due to land issues and also because of familiarity with cultural artefacts, it was difficult to get communities to relocate.

But he added that with continuous education, they would gradually come to understand the need and agree to move to a safe place.