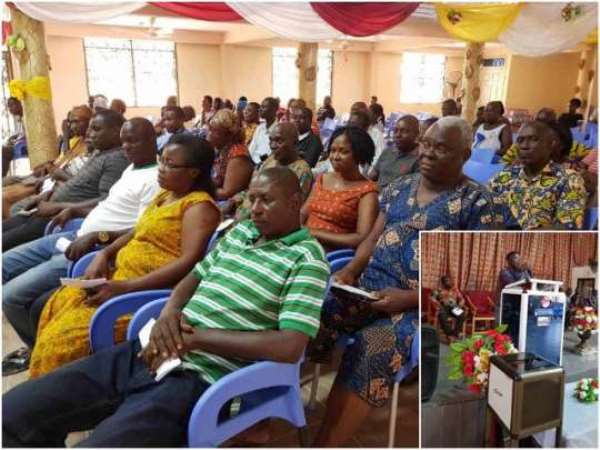 The Tema West Municipal Assembly (TWMA) has held a town hall meeting to give residents of the Municipality an opportunity to meet officials of the assembly and voice out on issues affecting them in their communities.

The meeting, which is the first of its kind after the inauguration of the assembly, is to inform residents of the creation of the new assembly and the need to team up with the assembly to bring development to the locals.

In an address to the gathering at Adjei Kojo on Wednesday, the Municipal Coordinating Director of the TWMA, Mr. Bediako Oberempon Asare, said, 'We are here to help the assembly, but before we can do that, we need to get closer to the people.'

He informed that people were relevant in the local government structure, because their concerns would be sent to the assembly for consideration and implementation, which meant that the people were taking part in governance.

He said, being separated from the TMA meant they were now independent and had come closer to the people, and that meant the people should be willing to help the assembly stand on its feet, adding that, 'Before the freedom you've got would be perfected, you have to help by paying rates so the assembly could get money for development.'

He observed that there were a lot of criminal activities in the various communities and therefore residents should see security as 'our own responsibility and give information to the assembly whenever criminal acts are detected.'

He said the assembly's resolve to encourage neighbourhood watch committees and provide training to volunteers so they protected the various neighbourhoods in the Municipality.

He advised against promoting filth by saying, 'When the town is neat, sicknesses will be reduced. Sanitation and waste management isn't only for the Assembly, so we should do our part to reduce indiscriminate disposal of waste."

The Assembly Member for the Adjei Kojo Electoral Area, Mr Romeo Elikplim Akahoho, said, there was the need to create awareness and sensitize the people about the creation of the new municipality so that they know where to pay revenue and direct their request.

He said, 'The old assembly hasn't done much for them. Anytime there is development, it goes to Tema. Tema has good roads but they are also laying asphalt on them, meanwhile my area doesn't have a single drain; even what to grade the road with is becoming difficult.'

He observed that the new assembly was there to assure them that revenue collected would be used to develop the area now that they were a separate municipality.

Mr. Joseph Adu, a resident of the Adjei Kojo community, in an open forum, informed of how, what he described as one-man churches were disturbing the peace of residents.

He asked the assembly to regulate the activities of such religious organizations so they would tone down on noise making.

Mr. Isaac Tetteh Nartey, a Teacher at Adjei Kojo TMA Basic School, observed that there were no fence walls around the school, which had made the school become a den for criminals.

He said there were only one government basic school in the area which meant that the structures weren't sufficient for the large number of pupils on the school register which was creating problems for teaching and learning.

Mrs. Mary Sarfo, also a teacher of the school, pleaded with the assembly to come to the aid of the school and construct pavilions which could be used as temporal classrooms before the commencement of the next academic year, otherwise the situation would get out of hand.