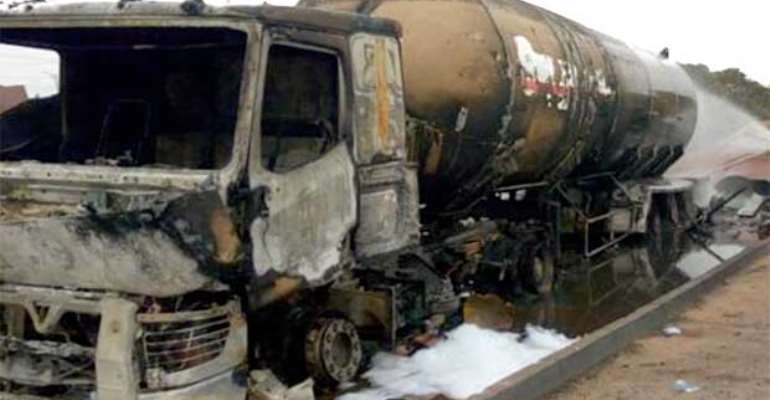 It has become almost impossible to end a year in Ghana without recording an incident of fire outbreak which results in the deaths of individuals and loss of property worth millions of Ghana cedis.

From Kumasi to Accra, Wa and the rest of the country, there has been a series of reports of deadly fire outbreaks.

Annually, Ghana loses substantial amount of revenues and resources which could be channelled to improving key sectors of the economy such as health and education to fighting avoidable fire cases.

The Ghana National Fire Service (GNFS) is the institution mandated to officially fight fire in the country, but it seems to be overwhelmed with the number of cases it has to respond to yearly considering its reported under-resourced nature.

The Ghana Burn Association has a membership of persons who have suffered from fire outbreak in one way or the other, some of whom are apparently survivals of the June 3, 2015 twin fire/flood disaster that claimed the lives of nearly 200 individuals at the Kwame Nkrumah Circle in Accra.

The June 2015 disaster left the whole country devastated and many thought the country would have learned a lesson from the incident to deal with fire issues but it seems this 'monster' continues to ravage homes and gas stations nationwide, leading to loss of lives and damages to properties, with government and key stakeholders appearing clueless as to how best to bring the menace under control.

Statistics
Recent reports by the GNFS show that in 2017, Ghana recorded a total of 33 fire related deaths, with about 239 individuals reportedly sustaining varying degrees of injury due to fire outbreak in the year under review.

One of the 33 individuals who lost their lives in 2017 to fire was the late cameraman of Madina-based Net2 Television, Mohammed Ashalley, who died in the process of covering the Atomic Junction gas station fire disaster in October during the year under review.

Mr Ashalley was a member of President Akufo-Addo's media crew, and his death shocked several Ghanaians, especially his family and colleagues at Net2 TV.

According to GNFS, the deaths in 2017 represented a three percent increase as compared to the 32 people who died in 2016.

However, in spite of the reduction in the number of fire outbreaks, the number of deaths in 2017 was higher than the deaths recorded in 2016, a major source of concern.

Regional Breakdown
The Greater Accra Region recorded the highest number of fire outbreaks in 2017 with a reported 1,050 cases, with the Ashanti Region occupying the second spot with 770.

With respect to recorded deaths in the regions from fire, Greater Accra had six, Central and Eastern Regions recorded one death each, Western Region had three, with the three regions in the north not recording any deaths.

Causes
Divisional Officer I, Prince Billy Anaglate, is the head of Public Relations at the Ghana National Fire Service and gave some of the causes of fire outbreaks in Ghana as careless usage or handling of naked light like candle, improper handling of hydrocarbons and flammable liquids, overloading of electrical sockets and improper or careless usage of liquefied petroleum (LP) gas, among others.

Unacceptable
“The death toll from the Ghana Fire Service data is very unfortunate. Why lose even a life which could be prevented?  If we should go into the various fire outbreak incidents that led to this, you will feel sorry for yourself just because someone hasn't played his or her role well,” Godwin Kofi Akuamoah, a fire management consultant and managing director of Right Consults & General Suppliers Limited, a company based at Teshie in Accra which deals in electronic devices and fire management systems, lamented.

“The Ghana Fire Service is still not adequately resourced and just another fire incidents will leave all of us devastated,” Mr Akuamoah stated this in an interview with DAILY GUIDE.

He is of the firm conviction that many of the fire cases could have been prevented or could be prevented if the masses were adhering to fire safety or management measures.

It is believed that quite a number of the fire cases in Ghana are preventable or could be prevented with knowledge about fire management or the adherence thereof.

Far Behind
But Mr Akuamoah is of the opinion that not much is being done by government and other key stakeholders like civil society organisations and the media to sensitise Ghanaians about fire safety and prevention measures at homes and in the offices.

“I strongly believe Ghana is still far behind when it comes to fire management in our homes, offices, markets, industries, etc. What happened to the report from the recent committee that was set up when we had the atomic gas explosion? Yeah, maybe something is being done but we can't hear anything. Are recommendations being implanted in secret?” he queried.

Mr Akuamoah continued, “Let Ghana experience another major fire incident and you will see another committee being set up to look into it again. The Ghana Fire Service is still not adequately resourced and just another fire incident will leave all of us devastated.”

Way Forward
GNFS believes fire safety is a shared responsibility which must be taken seriously by every stakeholder.

Mr Anaglate suggested that civil society, community-based organisations, opinion leaders and the general must all hold district assemblies and Ghana Water Company (GWC) responsible regarding the provision of firefighting hydrants within communities to aid firefighting operations.

Mr Akuamoah also believes that as part of measures to help address the menace, there is a critical need for “a relook” at government's policies on fire management, adding that “government should also relook at the L.I 1724 and see what modification that needs to be made.”

He observed emphatically that “I strongly think we need to relook at our policies. Things are changing every day with new building designs and industries springing up. Do our old provisions in the LI 174 cater for the current situations we have at hand? Ghana Fire Service needs to intensify education and supervision as well.”

The fire management consultant called for a fire risk assessment to be conducted for every premises in Ghana, which “will technically and professionally outline the various fire hazards that exist for a comprehensive fire management plan to be implemented from prevention, protection, containment, signages, escape roots, firefighting system, etc.”

Mr Akuamoah called for the intensification of fire safety and management awareness campaigns and education across Ghana.

“For my company, we have made fire education one of our priorities and so from last year we introduced a stakeholder's conference where we invited our clients and the general public to take them through various fire management systems with new technologies coming up for them to be abreast with time. This, we have planned to do every year from now and intensify it by organising fire education for specific sectors,” he added.

Commenting on whether or not GNFS as an institution is doing well in engaging the masses on fire safety and management, he said, “Ghana Fire Services, I know, has a day for that but I think the involvement of the general public is limited. A good collaboration between them and media houses such as yours will help the sensitisation go far. I believe the media has a role to play. You can cut down on politics small and give some attention to social issues such as this one.”