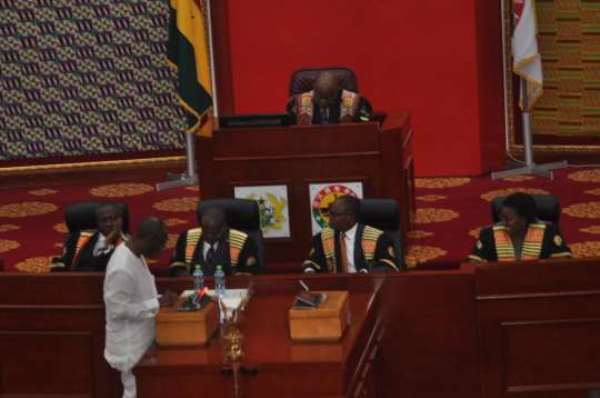 Mr Ken Ofori-Atta, the Minister of Finance, on Thursday, said although the Bank of Ghana's Monetary Policy Committee (MPC) maintained a relatively tight policy stance throughout 2017, the policy rate was lowered by 550 basis points (bps).

He said the MPC's objective though was geared towards anchoring inflationary expectations and ensuring stability of the domestic currency.

But the policy rate was gradually lowered from 25.5 percent from the beginning of the year to 23.5 percent in March 2017, 22.5 per cent in May, 21.0 per cent in July and 20 per cent in November, as inflationary pressures eased, while growth, particularly in the non-oil sector, remained modest.

Mr Ofori-Atta explained these in his presentation of updates on macroeconomic developments in 2017, when he presented the Mid-Year fiscal Policy Review of the 2018 Budget Statement and Economic Policy to Parliament.

He said growth in banks' outstanding credit to the public and private institutions moderated further in December 2017 on the back of rising non-performing loans (NPLs) and tight credit conditions.

However, Banks' total outstanding credit growth slowed to 12.8 per cent from 17.6 per cent was recorded in the same period in 2016.

He said total outstanding credit stood at GH¢33,819.3 million at the end of December 2017, of which the private sector accounted for 89.8 per cent, hence interest rates broadly trended downwards in the money market during 2017, while the interbank weighted average rate declined to end December 2017 at 19.3 per cent, from 25.3 per cent in December 2016.

The Finance Minister however indicated that rates on the 7-year bond went up to 19.8 percent from 18.0 percent, while the 10-year bond yield remained unchanged at 19.0 percent, over the same comparative period.

He stated that Deposit Money Banks' average 3-month time deposit rate, also remained unchanged at 13.0 percent on annual basis, while the savings rate, went up on annual basis by 150 bps to 7.6 percent in December 2017.

Mr Ofori-Atta said the Government in 2017, also introduced a number of initiatives, in an attempt to deepen the capital market, increase liquidity and trading activities as well as encouraged more companies to list.

He mentioned the issuance of a 15-Year Fixed bond, as part of efforts to lengthen the maturity profile of the domestic debt market, saying this currently served as a reference benchmark for pricing of corporate issuances.

Mr Ofori-Atta noted that on the back of positive macroeconomic indicators in 2017, the GSE was rated among the best performing markets in the sub-region, recording a Composite Index of 52.73 percent, compared with the -15.33 percent at the end of 2016.

He also commented on the Collective Investment Scheme (CIS) funds under management, saying it recorded a rise of 91.5 percent from GH¢1.13 billion in 2016 to GH¢2.2 billion in 2017.

He said the Government has amended the Income Tax (Amendment) Act, 2017 (Act 941), to exempt gains on investment from taxation for 2 years, adding that the Securities and Exchange Commission (SEC), together with Ministry of Finance, has developed relevant guidelines to strengthen SEC's capacity to effectively supervise activities of the capital market industry.