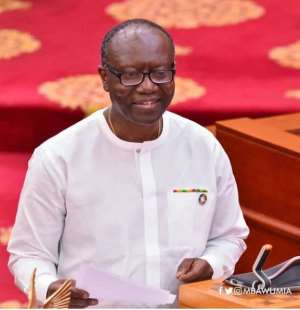 Contrary to earlier conjectures that VAT and NHIL levy will be increased prodigiously, the Finance Minister, Mr. Ofori-Atta declared, “there will be no increase in VAT.”

Mr. Ofori- Atta subsequently announced that the Health Insurance Fund Levy and the GETFund components from the VAT have been separated and will now have straight levies of 2.5 percent respectively.

Meanwhile, Former Finance Minister, Mr. Seth Terkper and the minority in Parliament is of the opinion that government is deliberately throwing dust into the eyes of Ghanaians by covertly increasing VAT on the blind side of the public.

For instance, former Finance Minister, Mr. Seth Terkper, in a tweet shortly after the budget has implored the public and business community not to celebrate over the 2018 mid-year budget review, contending that the Value Added Tax (VAT) has been furtively increased albeit the Minister of Finance Ken Ofori-Atta asserts otherwise.

“Ghana’s VAT rate is 17.5 percent and that includes NHIL (2.5%) and GETFund (2.5 %). Removing them from the VAT base and making them specific rates (instead of ad valorem) and increasing that rate to earn more revenue (quoting Hon Kwarteng) is a ruse,” Mr. Terkper argued in a tweet immediately after the presentation of the 2018 mid-year budget review on the floor of parliament house on Thursday.

Also, many Ghanaians have expressed mixed opinions as to whether VAT has actually been increased or not.

In the light of this, Desert Reporters Ghana takes you through how the Finance Minister ‘sneakily’ increased VAT in the following Analysis.

Our source at the Ghana Revenue Authority (GRA) indicates a marginal increase in VAT contrary to what the minister stated on the floor of parliament house on Thursday.

This means VAT is GH₵ 43.75 (previous) b) Now the Current VAT on the straight Levy Method as announced by the Finance Minister (this is the Sales method.)

What the above scenario means is that the producer is going to incur an additional cost of GHC 12.5 more in making the gari. It also means gari lovers are going to pay more (GH₵ 12.5) per the analysis above.

On Thursday, the Finance Minister outlined several policies to enhance the economic prospects of the nation including 3.5% tax on the importation of luxury vehicles with engine capacities of 3.0 liters and above and 35% of incomes of above GH₵ 10, 000.00.

The denouement of the mid-year budget review was greeted with many varied opinions. Whereas government and sympathizers of the New Patriotic Party (NPP) are of the view that the budget, if properly implemented will benefit the ordinary Ghanaian in the long run; Minority in Parliament and sympathizers of the largest opposition party, National Democratic Congress (NDC) and a section of the Ghanaian public believe otherwise, arguing the budget is going to further burden the ordinary Ghanaian.