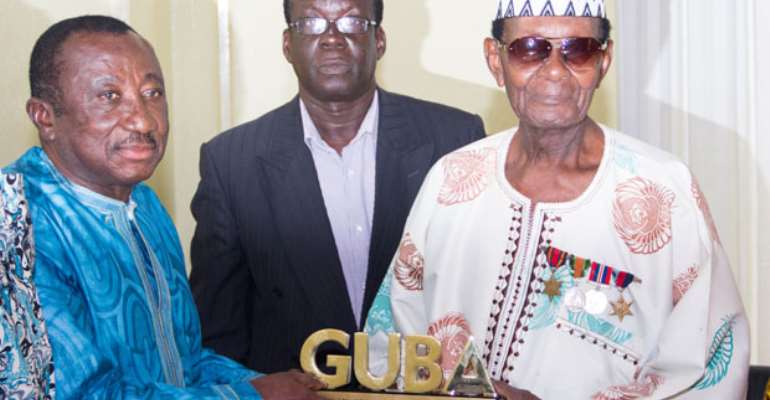 Ninety-three- year-old Joseph Ashiteye Hammond, who served in the Gold Coast Regiment of the Royal West African Frontier Force (RWAFF), has been honoured with an award for service to humanity by the British-based organization, GUBA.

The old man formally presented the award to the Executive Director of the Veterans Administration of Ghana (VAG), Capt Ben Duah (rtd), at the headquarters of the organization in Accra yesterday.

In his remarks before the presentation, Captain Duah wondered why many do not appreciate local veterans who have contributed immensely towards the peace we now enjoy in the country.

He found it ironic that such veterans are rather appreciated elsewhere as in the case of Joseph Hammond who was sponsored for his trip to Britain to receive his award by the British High Commission in Accra. He expressed gratitude and added that the British government recently released an amount of GH¢330,000 towards the upkeep of veterans.

He disclosed that Ghana has 120 surviving WWII veterans but was quick to add that one died yesterday reducing their number to 119.

He called on Ghanaians to support the upkeep of veterans at their advanced age as they experience an assortment of ailments such as diabetes and prostate challenges, among others.

The Executive Director charged Ghanaians to donate to the Poppy Appeal when the period was due, adding that many do not even know the significance of the subject.

He indicated that Veterans appreciate the importance of peace having tasted war before; hence they are in a better position to differentiate between the two conditions.

He continued “it is not for nothing that veterans are described as ambassadors of peace by the Royal Commonwealth Ex-Service”.

GUBA awards seek to promote closer ties between Ghana and the United Kingdom. Launched in 2010 as the GUBA awards, it is an annual event which recognises and acknowledges the contributions of individuals or corporate organizations.

The Gold Coast was one of the sources of soldiers for the British during WWII – all of them belonging to the 81 and 82 Divisions of the RWAFF. They fought in the jungles of Burma against the Japanese. Names like Chiringa, Arakan, Myaung given to some barracks in the country are reminders of places where Gold Coast soldiers fought in Burma.