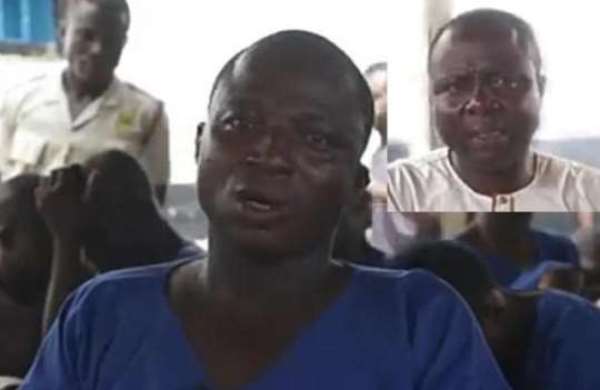 Mr Seidu Alhassan, an inmate at the Winneba Local Prison, has advised his fellow fraudsters to repent and desist from the act.

"It is wrong to dupe or defraud anyone of their belongings and monies," he said.

Mr Alhassan gave the advice when the GNA accompanied and assisted Mr Ibrahim Oppong Kwarteng, the Ambassador Extraordinaire of Prison to record the TV Series "Time with the Prisoner".

Narrating, his modus operandi to Mr Oppong Kwarteng, Master Alhassan said he and his partners had duped several unsuspected victims over the years.

He said sometimes, the team dressed neatly and pretend they have were looking for direction to a location or they had missed their way and in an attempt to help them, the people fall prey to their tricks.

He said in most cases, they used gold to lure their victims and eventually deceive them with something fake.

"Mostly traders, who come to the city and strangers fall victim to our tricks," he said.

The now repented fraudsters said sometimes for the victims not to suspect their intentions, they usually use the scriptures and quoted from the Bible to play on their intelligence to enable them trust them.

Mr Alhassan said because of their constant practice, they had come out with peculiar signs, particular touching the back of their heads to signal other partners to come on board.

He told Mr Oppong Kwarteng, who is also the Executive Director of Crime Check Foundation that on one particular day, he and his partner duped a student of his GH¢1,600.00 school fees, but luck eluded him and he was arrested the following day.

He said when he was arrested and taken to the Kasoa Police Station, because of regular complains about their activities, he was quickly arranged for court, where after the trial he was convicted.

"Sometimes we misuse the monies we get from our operations on unnecessary things like smoking Indian hemp, drinking and sponsoring ladies," he added.

He, therefore, called on Ghanaians, especially traders, who travel from far and near to purchase goods to focus on where they were going and not to fall victim to any such detractions.

He urged them to be extra vigilant in their day-to-day activities in town and protect their personal belongings and monies well.

Include private tertiary institutions to absorption of fees ...
1 minute ago