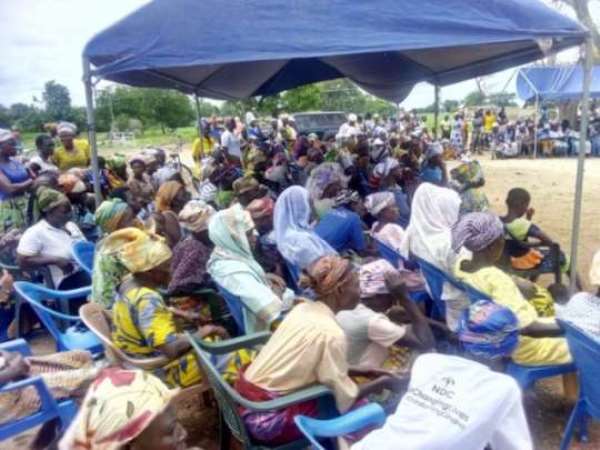 The Adaptation Fund Sub Projects, made up of Dry Season Gardening, Integrated Beekeeping and Environmental Protection (IBEP), Fishing and Tree Growing Projects would benefit selected communities such as the Yidongo, Gorigo, Adaboya, Vea, Amanga, Kunkua and Aliba all in the Bongo District of the Upper East Region.

The one year sub projects, with emphasis on women are aimed at increasing households' incomes and ensuring food security.

The projects had funding support from the Adaptation Fund Project (AFP) of the United Nations Development Programme (UNDP) and the Ministry of Environment Science, Technology and Innovation (MESTI) through the Upper East Regional Directorate of the Environmental Protection Agency (EPA), the institution in charge of monitoring and supervising the projects.

Launching the project at the Aliba Community, Mr Peter Ayamga Ayinbisa, Bongo District Chief Executive (DCE), lauded the projects and stated that the District experienced adverse effects when it came to climate change.

He expressed optimism that not only would the interventions help empower the communities to adopt to climate change, it would also help contribute to the attainment of the Sustainable Development Goals (SDGs) of addressing hunger, poverty and climate change.

Mr David Amozebega, the Programme Manager of META Foundation, said his outfit which was in charge of the Dry Season Gardening would build the capacity of the communities to establish seedlings in the areas of tomatoes, pepper and onions and support them with modernized agricultural practices to conduct farming activities during the dry season.

He indicated that considering the role of women in food security and household livelihoods interventions, the project would at least have 60 percent of the beneficiaries being women and added that, the project would work to ensure that the youth and the vulnerable groups, such as physically challenged persons become integral part of the project.

Mr Daniel Kansake, the Northern Regional Manager of LINK Ghana, stated that LINK Ghana with its Bee Project, would implement some key activities including the procurement of beehives and accessories for the beneficiary communities, conduct beekeeping training, sight, clear and install hives, build the capacity of the communities members to trap bees, the management of hives, harvesting and marketing as well as conduct Gender Baseline Analysis.

He said the project, which would target 150 farmers made up of 100 females and 50 males, had the overall objective to improve environmental sustainability and household income of about 150 farmers through bee keeping.

The Regional Manager expressed worry about the situation where many farmers set fire in the bush in attempt to trap bees for honey and indicated that the practice often led to contamination of the honey and bush burning.

He said the project would promote environmentally friendly methods of honey production and apiculture and increase the production of high quality honey for both local and international markets.

The Paramount Chief of the Bongo Traditional Area, Bonaba Salifu Atamale Lemyaruum, who is also the Vice President of the Regional House of Chiefs, impressed upon the beneficiary communities to embrace the project and stressed that the selected projects for the District had the greatest potentials of creating wealth.