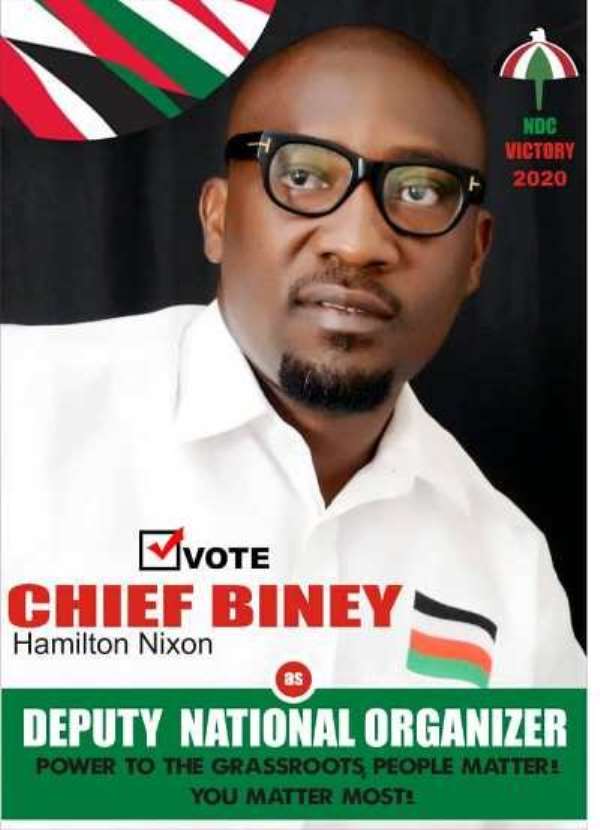 A leading communications team member of the opposition National-Democratic Congress (NDC), Chief Biney Hamilton Nixon has declared his intention to contest for the position of Deputy National Organizer of the party.

In a statement issued in Accra, he expressed his desire to work assidiously to bring the party back to power in 2020.

Below is the full statement
I present to you, your humble servant, ‘one of your own’, a grassroots man who thirsts for power. I have risen through the ranks from Tema West to Kpone Katamanso as a grassroots organizer, then to Ekumfi as an elected Vice Chairman and a Security General in the Central Region.

Having worked and walked through the rank and file of the party across the length and breadth of the country, I have come to understand that, humility to consolidate our votes and to attract the ordinary voter on the street is what we need to rescue power come 2020.

As stated in our party’s constitution(Article 29) which states “The National Organizer and Deputy National Organizer shall be the Chief field operators of the party especially for the purpose of recruiting membership, mobilizing support for the party and ensuring high voter turn-out at all elections in which the party is involved”.

At this point in our life as a party, what we need is a committed, loyal and dedicated foot-soldier who craves for electoral victory from our opponents and that is what I bring on board.

Giving strength to the polling station is key to securing power and that is what I thirst for. One thing as many of you who have had the opportunity to know me closely can attest to is being a team player. And with that, I will support and work with the next elected national officers and even tap into the knowledge of those who have served in any capacity in this party in the past. For in unity we can build a stronger force to overthrow the NPP party through the ballot.

Upon broader consultations, I finally declare my intention to contest in the upcoming elections of the great NDC party as Deputy National Organizer. Empowering the grassroots and securing the needed logistics to operate positively will be my key focus as a leader if given the mandate.

Fellow Akatomansonians, I am knocking on your doors, to get on board, take charge of my campaign as your own, for a win for Chief Biney, is a win for the grassroots.

'Visit our lands again and we'll visit mayhem on you' — Chi...
3 minutes ago