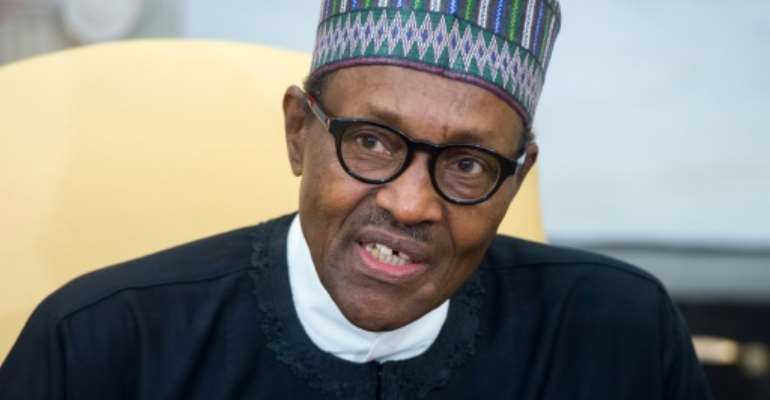 Nigeria's President Muhammadu Buhari, seen during a visit to Washington in April, made the creation of a new national airline a key election campaign promise three years ago. By SAUL LOEB (AFP/File)

The Nigerian government launched plans on Wednesday to create new flag carrier airline Nigeria Air by the end of this year.

Aviation minister Hadi Sirika revealed the news in a press conference at the biennial Farnborough Airshow, which is held southwest of London and where billions of dollars of aerospace deals are traditionally announced.

"I am pleased to tell you that we are finally on track to launching a new national flag carrier for our country: Nigeria Air," Sirika announced.

The government "has a moral and social responsibility to create a new national carrier", he told reporters, adding that there was "a huge need in demand".

"The business case for this... has been completed and we are now in the phase of the procurement" of aircraft.

And in a tweet, he added: "We've been talking to Airbus and Boeing ... regarding the aircraft for #NigeriaAir, and we will be making announcements very soon. We are currently negotiating."

Nigeria Air will be a Public and Private Partnership that will, however, be managed fully by the private sector.

The government will not own more than five percent of the group, which will be run on a commercial basis.

The national carrier will have domestic, regional and global operations, while the government is now seeking a strategic partner to invest in, develop and operate it.

Some 1,500 flying routes were considered and 81 have now been selected.

Sirika added that the airline would allow the nation to tap into the potential of its growing middle class in a population of more than 180 million people.

"Nigeria is a very responsible aviation nation ... and so we know the game," he noted.

The new carrier, whose tagline is 'Bringing Nigeria closer to the world', aims to launch its first services in December 2018.

The Nigerian air traffic market of more than 15 million passengers is forecast to grow at five percent per year through to 2036, according to the government.

"A mile-long road leads to nowhere; a mile long runway leads to everywhere," the minister, who is a trained pilot, added.

The formation of a new national airline was a key election campaign promise made by President Muhammadu Buhari three years ago.

"Eighty percent of carriers in Africa are non-African and Nigeria has not been a player for a very long time now," noted Sirika.

He added that the new Nigeria Air logo represented the national symbol of the eagle, soaring through the skies.

The country has been without a national flag carrier since 2003 following the demise of Nigeria Airways, which was plagued by debt and collapsed in financial difficulties.