Challenging Heights Urges Government To Suspend The Ban On Fishing 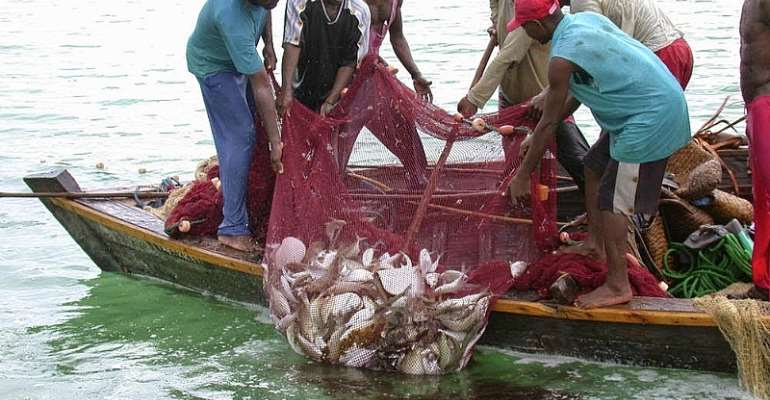 Challenging Heights, a child centered organization working in coastal regions of Ghana, has urged government to suspend the impending ban on fishing activities in the country. The anti-trafficking Ghanaian NGO has warned that implementing the ban will result in mass child poverty in the coastal areas, and consequently result in child trafficking.

In a press conference addressed by its President, James Kofi Annan, the organization warned that reducing fishing activities at the coastal areas without sufficient sensitization, and without government livelihood intervention, will result in fishermen being forced to sell their children to their counterpart fishermen on the Lake Volta.

There are over 20,000 children currently working on Lake Volta as fisher boys, according to a 2013 ILO estimates. Nearly all of these children were trafficked from the coastal regions of Ghana for purposes of exploitation.

Poverty in the coastal areas, has been the primary cause of fishing child trafficking in Ghana, and the most affected regions are Central, Greater Accra, and Volta Regions.

There have been several efforts in the past, by government and civil society organizations, to reduce the incidence of child trafficking on Lake Volta, mainly through rescues, improvement in the livelihoods of the fishermen on the coast, and through sustained awareness.

That is the reason why in 2015 the government deliberately targeted poor fishing communities with the Livelihoods Empowerment Against Poverty (LEAP) program, as an important tool to reduce poverty in order to stop the trafficking of children from the coastal areas to the Lake Volta.

This month the government of Ghana, through the Ministry of Fisheries, has announced a ban on fishing activities, across board, in the coastal regions of Ghana.

The reason government has given is that there is a spawning season in August, and therefore the ban will afford ocean fishes to have undisturbed spawning season.

Available records show that more boys and girls are trafficked from the coast to the Lake Volta during the month of August, than any other month.

This season of trafficking has been due to the onset of the school vacation, when parents and guardians send their children out for labor exploitation, under the pretext of working to support them during the vacation.

The presence of the bumper fishing season presents opportunity for parents to earn income, for themselves, and to support the education of their children.

According to Challenging Heights, banning fishing in the coastal regions of Ghana at this time of the year when there has not been prior sensitization, will, therefore, present fertile grounds for fishermen to be forced to send their children to the lake Volta, for alternative fishing activities, in keeping with the history of the trafficking of children to the Lake Volta.

This opportunity for mass trafficking of children will undoubtedly erode the gains we have made in reducing the incidence of child trafficking.

At the same time, preventing fishermen from fishing at this crucial time when the new academic year will begin in weeks, means thousands of parents in the coastal areas may be unable to support their children in school when the school year begins, and this may results in basic school dropouts, thereby defeating the very essence of the Free SHS program currently being implemented.

“Our position is that the Ministry of Fisheries has taken a wrong decision, and this is about to create poverty among the coastal fisher folks in Ghana, and therefore we are calling for the suspension of the decision”, the organization concluded.