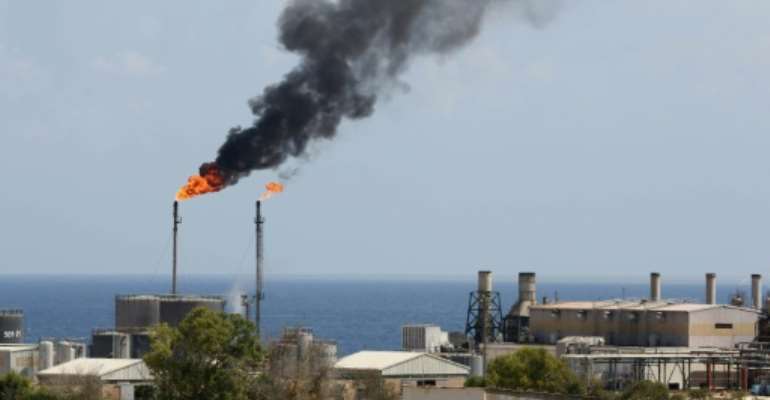 In this file photo taken on August 22, 2013, a general view shows the Libyan oil installation at Zawiya. By Mahmud TURKIA (AFP/File)

Libya's state oil company said on Tuesday that it has halted crude exports at its Zawiya terminal due to falling production after an attack in which four workers were kidnapped.

"National Oil Corporation has declared force majeure on crude oil loadings at Zawiya port," the NOC it said in a statement.

"This is a result of reduced production at Sharara following the recent attack and kidnap of four Akakus company employees," it said, adding that two were later released.

The Sharara oil field, which is managed by Akakus, is a joint venture between the NOC, Spain's Repsol, Total of France, Austria's OMV and Statoil of Norway.

It is one of the largest oil facilities in Libya, producing 270,000 barrels a day.

Force majeure is a legal measure that frees a company from contractual obligations due to circumstances beyond its control.

The NOC said it had evacuated and shut down station 186 -- where the four oil workers were kidnapped -- and evacuated two others.

Field production had been limited to 125,000 bpd, which it said was enough to meet the requirements of the Zawiya refinery, but "leaving no excess crude for export".

"Employee safety is always our first priority. This incident required us to shut down and evacuate a number of stations," said NOC chairman Mustafa Sanalla.

"We have to prioritise local demand for fuel. For the time being all Sharara production will go to the refinery."

On Monday, during a protest outside the NOC's headquarters in Tripoli, Sanalla called on tribes in the south of the country to release two employees, including a Romanian national.

Kadhafi's 2011 ouster saw production fall to about 20 percent of that level, before recovering to more than one million barrels per day by the end of 2017.

OPEC has estimated Libya's oil reserves at 48 billion barrels, which makes them the biggest in Africa.