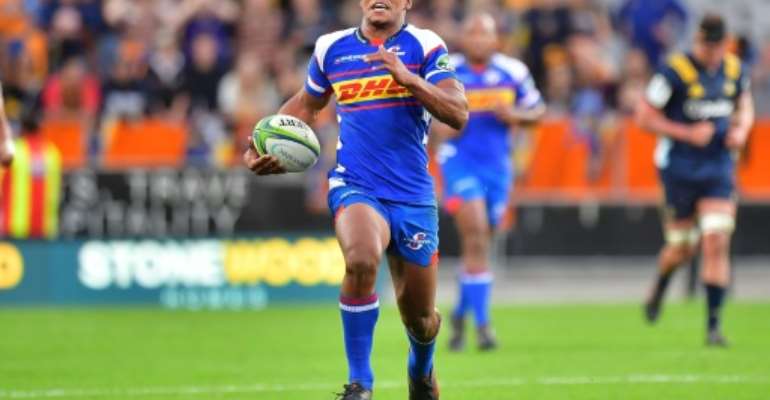 Stormers' Damian Willemse, pictured in March 2018, was among 22 other players chosen for a training camp, suggesting he could be the second choice for the Rugby Championship. By Marty MELVILLE (AFP/File)

Uncapped Western Stormers fly-half Damian Willemse has been called up by South Africa, suggesting he could be the second choice behind Handre Pollard for the Rugby Championship.

The 20-year-old was among 22 Stormers and Northern Bulls Springboks coach 'Rassie' Erasmus chose for a training camp in Stellenbosch near Cape Town.

Players from Super Rugby quarter-finalists the Golden Lions and Coastal Sharks players will be added when their participation in the competition ends.

Elton Jantjies from the Lions was the back-up fly-half to Pollard in the 2-1 home series success over England during June.

But given a starting place in the dead-rubber third Test won convincingly by England, Jantjies performed poorly in wet, cold conditions and was taken off on the hour.

Jantjies has been criticised by the media for positioning himself too far from the action with one pundit calling him a "carpark" fly-half.

Willemse, on the other hand, is likened to Pollard, with both playmakers keen to attack the gainline at every opportunity.

Bulls loose forward Marco van Staden, a consistent top-class performer during the Super Rugby season who missed the England internationals through injury, has also been selected.

South Africa launch their Rugby Championship campaign against Argentina in Durban on August 18 and also face world champions New Zealand and Australia during the six-round competition.