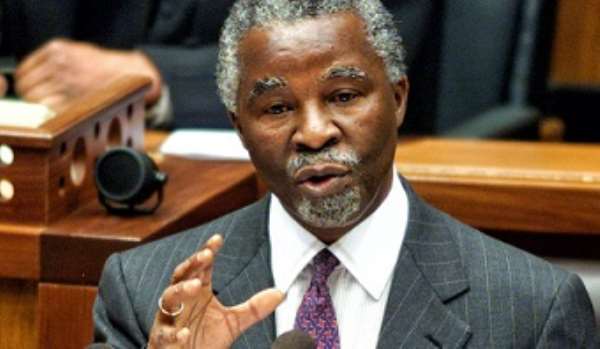 Thabo Mbeki, the former president of South Africa knew that Aids in his country was a medical crime but couldn't do anything about it

“Contrary to the West, Aids in Africa is heterosexually transmitted. Contrary to the West, where relatively few people have died from AIDS, itself a matter of serious concern, millions are said to have died in Africa. Contrary to the West, where Aids deaths are declining, even greater numbers of Africans are destined to die. People who otherwise would fight very hard to defend the critically important rights of freedom of thought and speech occupy, with regard to HIV-AIDS issue, the frontline in the campaign of intellectual intimidation and terrorism which argues that the only freedom we have is to agree with what Western Establishments decree to be established scientific truths.” Thabo Mbeki

Through an exchange of letters between scientist Johan van Dongen and former South African President Thabo Mbeki, Johan received his official letter to the leaders of the largest industrialized countries, the so-called G8, in which he defends his theory about a white conspiracy against the increasing world black population.

Johan also came across additional evidence from the same route about the real origins of AIDS that underpin his lurid story.

Mister Mbeki has made clear evidence to the pharmaceutical industry by stating also with clear evidence: 'AZT does more harm than good'. And that's right because AZT does not cure AIDS at all but causes the disease by reducing our defense mechanism.

'Azidothymidine (azido-deoxythymidine), a drug (virustatic) against infectious diseases. It is used in HIV infection.'

“AIDS is becoming a veritable epidemic in South Africa that will depopulate our country and especially the poorest part of it. For example”, Mbeki continues: “The latest figures indicate that more than twenty-five percent of the adult population is infected with the AIDS virus. In a population of 42 million people, 4.2 million people are already infected with the AIDS virus in South Africa.”

Unofficial circles even speak of an infection of more than fifty percent of the labor force. Mbeki's statement that AIDS is not caused by the AIDS virus is certainly but partly true. The retroviruses that are always present in our body can, in fact, be controlled by a range of medicaments.

Despite that also, toxins, like mycotoxins, and radioactivity (for instance caused by the application of depleted uranium), and nuclear tests are other means that can lower our body resistance so that microorganisms can strike deadly.

In fact, many retroviruses are brought into the African population because of contaminated vaccines during enormous WHO vaccination campaigns as carried out by Hillary Koprowski.

But it is precisely poor and very malnourished people in specifically the African continent who are affected because the build-up of our immune system is seriously jeopardized by malnutrition, especially vitamin C and D and protein deficits.

Everything that has been said by Western- or other foreign government agencies and its medical services about the true origin of AIDS has become obsolete.

The proof for this is that in Africa AIDS is transmitted predominantly via heterosexual contacts in a pre-programmed way. As a result, AIDS has a clearly different transfer character than in the West.

President Thabo Mbeki
“In my opinion”, Mbeki continues; “There are not only social but also medical reasons for this difference. The only freedom that South Africa has on this point is to agree with what goes on for established scientific truths dictated by the pharmaceutical industry.

Some Western medics and politicians propagate their ideas with a religious verve, bordering on fanaticism, which is truly frightening. AIDS is a very unique African catastrophe. Not so long ago people were murdered, tortured, imprisoned or silenced in our country because the white government thought their ideas were dangerous.

We are now being asked to do exactly the same. There is a scientific vision shared by the majority, and any counter-sound is forbidden.”

And Thabo Mbeki is not alone in his view because he is supported by thousands of scientists who are convinced about the “Aids man-made theory”. AIDS has been created to eradicate our black fellow human beings and to generate billions of dollars and euros for the pharmaceutical industry.

AIDS threatens education in poor countries
In many of the poorest countries in the third world, more teachers die of AIDS that can be trained. As a result, many children miss out on education about the disease.

The World Bank warns of this in a publication that was published already on Tuesday 7 May 2002. More than 113 million children in the poorest countries cannot attend school because the teachers are too ill to be able to teach or have already died.

In the Central African Republic, 85% of teachers who died between 1996 and 1998 died of AIDS. In parts of Malawi and Uganda, one in three teachers is infected and in Zambia that is one in five.

But children do not only lose their teachers but also their parents and caretakers and now with their Ebola outbreak in 2014 in West Africa their medical aid workers. This leaves the support for these children to go to school and their medical care.

Sixty percent of new infections occur in the age group between 15 and 24 years, while 60% of all African prostitutes are infected with the AIDS virus. An unknown high number compared to the rest of the world.

In sixteen African countries, the infection rate is higher than ten percent and in one year even no less than five million black people became infected with the virus that causes AIDS (ref: World Bank and the ANP).

In-depth research has shown that it is suspected that three protagonists in the AIDS mystery, Hillary Koprowski, Robert Gallo and Luc Montagnier, have always known that it is carcinogenic viruses in infected vaccines that have caused AIDS.

A fact that is certainly supported when one thinks that the basis for this kind of misdeeds lies in the former laboratories of the Nazis.

And from the start of German national socialism, it became clear what the sleeves were doing. Numerous publications have been written by Nazi scientists about carcinogenic and genetically manipulated and even built-in viruses in bacteria (bacteriophages).

Artificially manufactured microorganisms that can become an infectious bio-weapon against Jews and blacks without the top and white Arians themselves becoming infected, that was their goal.

Thousands of publications about the creation of Aids and Ebola by German and American war criminals who have apparently never been read by Ab Osterhaus and Rene Remie of Solvay Duphar Weesp, and so I helped them by doing and describing them for them.

In the context of the Nazi research, it is therefore important to know that the HLA-DR5 type occurs mainly in Jews and hemophilia (blood-borne disease) patients.

The HLA-DR3 type, on the other hand, mainly occurs in dark-colored Africans. In general, you can say that it is more difficult for blacks to get AIDS than for whites. The reality of today, however, shows us a completely different picture: the vast majority of AIDS patients are dark in color!

In blacks apparently, the button in their hereditary system that should protect them against AIDS apparently turned around by the application of genetically engineered vaccinations, (expired) antibiotics, cortisol, radioactivity and mostly because many South Africans worked in the Kilo-mines excavating uranium for the making of atomic bombs.

After they returned home no less then 100% felt ill. These figures can be compared with those of miners who worked in the former East Germany and Yugoslavia and Czechoslovakia.

And this remarkable discrepancy is accentuated as all scientific research, from the wrong Germans that, just before and after the Nazi period together with Western powers was continued under the 'Apartheid regime' of South Africa, is still under scrutiny.

Only then does it appear that black people are suddenly susceptible to simple germs that would only cause the slight flu but ending with AIDS. For example, between 1911 and 1947, not one case of Kaposi's sarcoma in South Africa was discovered, but after 1949 this was suddenly the case in large clusters of dark-skinned people.

As soon as the 'National Party' of South Africa came to power, the first twenty-five pages of the South African medical journal 'South African Journal of Clinical Science' were devoted to this disease.

Striking in comparison with this is the fact that, when AIDS officially emerged in the early eighties, there were twenty-two of the first thirty publications on AIDS of twenty-two of the American Center for Public Health.

Moreover, also the World Health Organization was the first who published over 30 articles before other scientists were able to publish about this new disease.