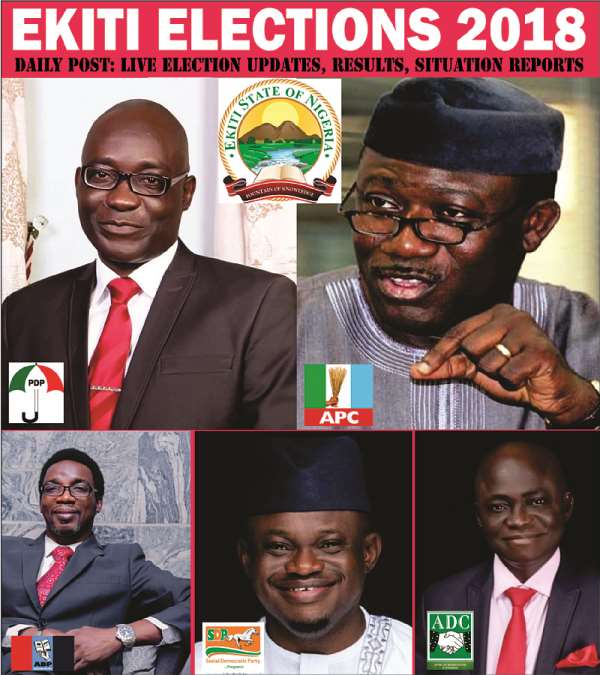 As expectedly, the July 14 Ekiti gubernatorial election was fiercely contested because of the character of the main actors involved. All sides deployed and spared no resource to ensure they outdo each other in a battle that might shape what is to come in 2019. Hopes were high on all sides so was despair. Issue-based campaigns, Manifestoes, Programmes, projects, policies, and the likes matter to no one. Nobody, even most voters, care less as long as one can throw a jibe into the camp of the opposition. Nigerians saw the actors’ desperations in full display. Thuggery uninhibited. Unchecked use of foul languages by the actors. Aside these, the election brought up a lot of questions regarding the Nigerian electoral system that even the eventual winner, the All Progressives Congress (APC) candidate Dr. John Kayode Fayemi, should have been ashamed of winning. But the things I took away from Saturday election are as follow:

Apart from the bad-blooded 2015 presidential election, the Ekiti gubernatorial election depended on heavy propaganda. Make no mistakes about this, both leading parties, the APC and Peoples Democratic Party (PDP) resorted to the use of this technique. But, do propaganda still win elections? Do insults ever win arguments?

Rather than telling the electorates what their policies and programmes are on how to improve their welfare, the two leading parties resorted to frivolities and pettiness. Scaremongering, cajoling, theatrical displays and in some cases, bullying rather than honest canvassing of votes were used in “getting” the votes. The outgoing governor, Mr. Peter Ayo Fayose, whose name was ordinarily not on the ballot paper left no stone unturned in ensuring that his anointed candidate, Professor Kolapo Olubunmi Olusola, wins the election. He was seen on national television stations with “broken neck” and “arms” saying “I’m in pains” in an attempt to sway the voters. He claimed to have been “slapped” by a police officer which led to his broken neck. Well, as unprofessional as some police officers can be in Nigeria, I doubt a police officer, even when drunk, would have had the guts to slap a sitting governor for any reason. Despite these dramatic displays, including Fayose’s attempt to cripple APC grand rally in Ado-Ekiti (with President Buhari scheduled to attend), all but guaranteed a win for Fayose’s candidate, Eleka.

My second takeaway from the election is that while it appears the PDP has not learnt much since 2015; APC seems to have gotten behind their 2014 shocking defeat. Prior to this election, Fayose reportedly boasted of getting another 16-0 (a veiled reference to his amazing victory in all 16 LGAs in the state in 2014) against Governor Fayemi. But unknown to Fayose and the PDP, they are going against Robert Greene’s warning in his best-selling book, The 33 Strategies of War, in which he warned against fighting the last war. One of the more interesting errors any campaign can make is “fighting the last war”. By this, I mean they believed in and deployed the same (or similar) strategy that proved successful in during the 2014 campaign but forgetting that the circumstances that were in favour of PDP then are, unfortunately, no longer available in the present. If the PDP can do a de-briefing of what really took place, I am so sure they will come to terms with how far they have not learnt since 2015 and how they have underestimated Fayemi’s second attempt. Were they honestly hoping APC will just go into the election with fait accompli?

My third takeaway from this election is that candidates seeking (re)elections after suffering a previous defeat may find it easier than those attempting to defeat an incumbent. From my experience, opponents that are more likely to win are those who have either previously lost their positions or suffered previous defeats. Those who were hoping to “go and sleep” after Rotimi Akeredolu won the APC governorship primaries in 2016 hoping to defeat him again after the poor showing in 2012 learnt the lesson the hard way. Prince Abubakar Audu would have become the Kogi state Governor today had he not suddenly died before the announcement of the state gubernatorial election results in November 2015. He lost his re-election bid previously in 2003. Buhari became Nigeria’s president again after three previous attempts and a stint as military head of state. Something tells me that if Segun Oni contests the Ekiti governorship election in the future, he might just win too!

The fourth takeaway from the election is that the outcome of the Ekiti election can either boost or ruin both parties (PDP and APC)’ 2019 objectives depending their estimation of each other before then. While positives for the APC will be that it may have reduced its rival’s chances in the South-West, there is a landmine already waiting for the party if it sleeps too much which the PDP might benefit from. As it was in 2014, the PDP, after winning the election in Ekiti, things were never to be the same after its heavy loss in Osun and the better-forgotten 2015 presidential election. Such trap may also await the APC. Fayose and PDP, not Eleka, are the biggest losers on July 14 2018. It may have shattered the hopes of any attempt for PDP to have any footing in the strategic South-West. But hope is not lost if the APC does rest on its oars as Osun, not Ekiti, governorship election might just provide the key and tools to unlocking and unearthing the goldmine of 2019!

My fifth takeaway is that while money is still a factor in deciding electoral outcomes, it may not be the main factor. Both leading parties deployed huge resources to influence the outcomes so nobody should play the victim. The “victimized” party was just being “outspent”, not because it did not spend. Since both leading parties are financially stable, it is a question of which can spend more to sway the voters.

In all, both parties were sinners (the difference is not a matter of kind, but of degree) during the election. There is urgent need to reform the electoral process because the #EkitiDecides2018 should not be the standard for any responsible electoral process in the first instance!