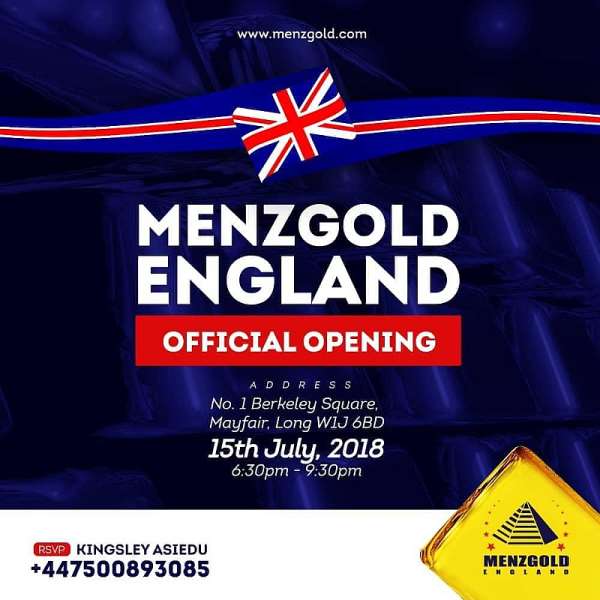 Leading figures from some of the world's powerful commodities trading (commerce), investment banking, insurance, realty and media in the English capital are expected to attend the launch in the business district of Mayfair.

Prominent political figures from the United Kingdom and Ghana are also expected to grace the event to be held in the first office of Menzgold in London.

The event is also expected to attract the glitterati from the African business community as the success story of the firm has taken hold on the continent.

With the constant and insatiable demand for gold supply among major global investors, the setting up of the London office will directly address the needs of Europe's investment and business capital.

The launch of the London office will also reduce the prospect of potential investors traveling to Ghana to purchase gold while boosting the confidence of gold dealers who are seeking trustworthy companies to trade with.

The Chief Executive Officer (CEO) of Menzgold, Nana Appiah Mensah, ahead of Sunday's event, revealed that the move to open the office in London is to further boost investor confidence and to usher the business to the doorstep of prospective clients, global associate and existing patrons.

“We are very excited about the opening of our London office as England represents one of the top business hubs in the world. We feel challenged by the prospect of rubbing shoulders with the best in the business world,” Nana Appiah Mensah said ahead of the launch.

The Ghanaian start-up, which has attracted thousands of loyal customers after five years of flawless work in the West Africa, will seek to tap into another major market in Europe.

This comes following the launch of Menzgold operations in the Spanish capital of Madrid last month. The Ghanaian gold dealership and exports company has ambitious plans for the future.

The opening of offices in Nigeria and the United States are planned for the coming months as Menzgold eyes the position of being Ghana's first company to go global.

The business started five years ago and has been touted as one of Ghana's most successful companies.