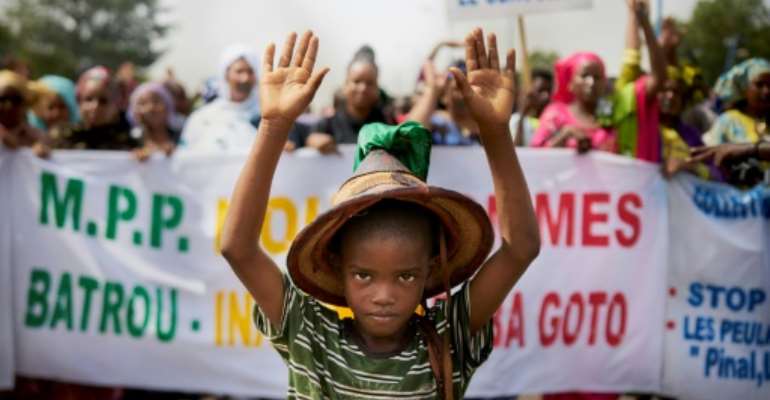 A Fulani boy protests in front of a sign saying 'Stop the Genocide' during a silent march in Bamako on June 30. By MICHELE CATTANI (AFP)

The heart of the country is becoming its deadliest region, gripped by a mutually-reinforcing mix of jihadist violence and ethnic disputes that are also sharpened by suspected climate change.

On July 1, suspected members of a Dogon hunters' group burned the village of Bombou, near the regional capital of Mopti, killing 16 and causing others to flee, according to Fulani groups.

Since the 2015 emergence of a jihadist movement headed by Fulani preacher Amadou Koufa in central Mali, disputes have regularly turned violent between nomadic Fulani herders and Bambara and Dogon farmers.

Hamsala Bocoum, the regional head of Tabital Pulaaku, the main Fulani group in Mali, has lost count of the number of times he has sought to defuse tensions, especially in Koro, the epicentre of the communal violence near the border with Burkina Faso.

"Every time it calms down, it flares up again," he said.

At a reconciliation meeting he attended between Fulani and Dogon leaders in Koro in March, Malian Prime Minister Soumeylou Boubeye Maiga had said he would "disarm militias, whether they like it or not."

"I have to say, I thought this would be the end of the violence," Bocoum told AFP.

But since then, abuses linked to all groups and even to the Malian army have multiplied.

In the shaded backyard of his plot, from where the call to prayer can be heard, Toumasse Daniel Sogoba, an evangelical church leader regrets the fast deterioration of inter-ethnic relationships.

"I never thought Mali, my country, would end up in such a situation, with massacres, Fulanis against Dogons, Bambaras against Fulanis -- an ethnic war," the former teacher told AFP.

"Each ethnic group has its own militia," Sogoba, who hails from the Minianka ethnic group present at the borders between Mali, Ivory Coast and Burkina Faso, said.

"Suddenly you see them kill one another, and you wonder why," he added, hinting at outside interference.

Unprecedented drought around the Niger river -- suspected to be linked to climate change -- has also made the disputes between farmers, herders, fishermen and loggers worse, according to the Tabital Pulaaku leader. 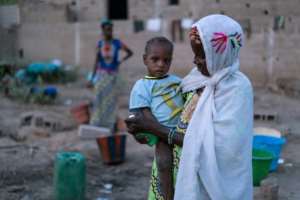 The violence in central Mali has caused many to flee their homes -- here, a woman and her child are pictured among a group of people who have taken shelter in Dialokorobougou, near Bamako. By Sebastien Rieussec (AFP)

A regional conference to discuss the arable land around the river is held every year.

The meeting is meant to set suitable times for herds to cross and to come back to their pastures, according to Hamsala Bocoum.

Until recently, "there was no trouble," he said. "Every time cattle came back from grazing, the harvest had already been completed. Then the animals came, fertilised the land and went. But now when animals cross back, farmers have not harvested yet."

Already-tense relationships were exacerbated by accusations of the state collaborating with ethnic-based militias in the fight against jihadists -- while the latter recruit mainly among Fulanis in central Mali.

"You cannot deny what is evident: there are jihadist groups, and these groups are probably majority-Fulani," Bocoum said. But often, "people confuse jihadists and Fulanis."

The conflation has unleashed a wave of abuses against Fulanis in the area.

"The Fulanis have been driven out of over a dozen villages in the Mopti region in what appears to be a campaign of targeted dislocation by the Dogon-allied militias," said Corinne Dufka, director of rights group Human Rights Watch (HRW) in West Africa.

Faced with an army that rarely intervenes or even cracks down on the nomadic group, Fulanis have lost some trust in the state.

Jihadists have exploited the dynamic as a recruitment tool, Dufka told AFP while on a trip to Mali.

"And in response, the jihadists then use those reprisals as a recruitment tool," offering people protection from the militias. 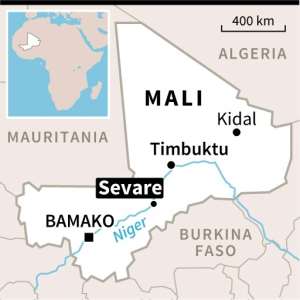 Map of Mali, locating the capital Bamako and Sevare, the main town in the troubled central region. By afp (AFP)

Before being militarily pushed back from many parts of central Mali in recent weeks, jihadists set up Islamic courts seen by the population as being efficient and fair, the HRW director said.

"During the rainy season it's going to be difficult for the military to maintain its presence in flood-prone areas and when the jihadists come back, the population is going to make a comparison between governance under the Malian state and Islamist governance. Which may not be favourable to the state."