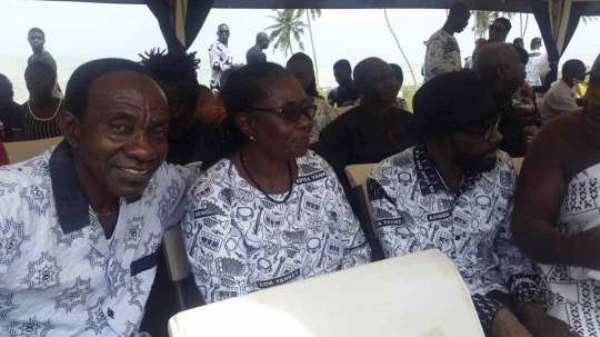 The mortal remains of high- life legend Charles Kofi Amankwandoh Mann, aka "C.K Mann", was laid to rest on Saturday, July 14, at the Takoradi cemetery in the Western Region.

C.K. Mann, who died after three years of illness, died at age 83, at the Ghana Ports and Harbour Hospital in Takoradi, on March 20.

The burial service was held at the Christ the King Catholic Church, before he was taken to his eternal resting place at the Takoradi cemetery.

He was on Friday laid in state at his residence at Anaji Estate and then at the Jubilee Grounds for wake keeping where musicians like Kofi Bentil, Pat Thomas and Gyedu Blay Ambolley served scores of mourners with some hilife rendition.

Present at the funeral were old musicians like Daddy Bosco, Kakaiku Number two, Pat Thomas and Gyedu Blay Ambolley, among others. Also present were the GHAMRO executives, some hiplife artistes like Kofi Kinata and Nero X.

The late C.K Mann started his musical career in 1950 in Takoradi, when he joined the Broadway Combo, the third band formed by the Broadway Cinema Company.

He was the first musician to introduce saxophone and trumpet into music in Ghana as his career spanned over four decades.