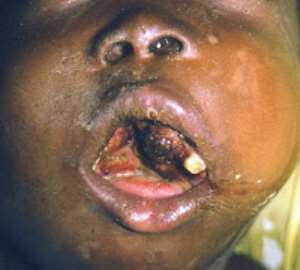 The World Health Organization WHO, together with the United States government and the French Institute Pasteur, have administered retroviruses to children in Uganda which not only cause Aids but also Burkitt’s Lymphoma cancer BL. Since the end of the nineteen sixties, the Epstein-Barr Virus EBV together with retroviruses were deliberately inoculated in Ugandan children.

That event, for instance, led to the death of hundreds of these children suffering from BL, which was caused by the EBV virus. Especially Africans become susceptible between zero and two years of age, the moment children became inoculated with the heavily contaminated vaccines against polio, small-pox, and tuberculosis.

It is also very astonishing to see the fact that this tumor is largely confined to tropical portions of Central Africa within the same areas where the frequent occurrence of HIV patients were detected. This must be the result of genetics engineered manipulations. The contaminated vaccines were administered on innocent children not only in Uganda but also in Kenya, Zimbabwe, and the former Belgian Congo.

The investigation of Dennis Burkitt, an Irish surgeon, discoverer of the lymphoma tumor, connected to the Makerere University College Medical School and also appointed at the Mulago Hospital in the Ugandan capital Kampala, has shown that immunodeficiency can be achieved by translocation of the 8th chromosome to the 14th with genetic engineering techniques causing a constant chromosomal disorder.

A cancer like BL is able to reveal when the capacity of the immune system or immune capacity is significantly suppressed by for instance mycotoxins or even malnutrition.

Further investigation pointed out that this specific BL-tumor followed the Central African malaria belt from the West African to the East African countries and especially appeared in the surroundings of lakes and water wells. Because of the fact that BL wasn’t found above an altitude of 1500 meters, according to Burkitt, it is likely that the tumor had purposely been purposely infected arthropods.

Doctor Williams and the mission hospital of Arua

In 1966, two publications of doctor Williams appeared in the “East African Medical Journal” concerning: “A local cancer registry in a mission hospital in Uganda”, and a second publication about: “A note on an apparent similarity in distribution of onchocerciasis”, Johan van Dongen immediately knew that strange kinds of mosquitoes were involved.

As mentioned before, Burkitt found the same peculiar appearance with BL in the West Nile District of Uganda, both diseases were exclusively infected in black people, which is in contradiction with African-Americans, who are roughly three times more resistant to this disease, compared to pale-skinned children noticed in the sixties.

Ugandan leaders are you there? When we take the statements written above into account then how can you explain that in the strong point area in the West Nile District, no children went down with the disease in the immediate vicinity of the Kulava Hospital, which was run by Americans! The same can also be said for the vicinity surrounding the Albert-Schweitzer Hospital in Lambarene, Cameroon.

Between 1951 and 1965, William registered many diseases found in his 41,000 patients. In the early sixties, a dramatic anemia was found in babies and young children, of which over fifty percent of them died. At the same time the virus which causes Kaposi sarcoma, a disease which mostly appears in Aids patients and caused by the cytomegalovirus CMV, was involved in the mentioned areas.

In 1966, Williams also registered a dramatic epidemic of Burkitt’s Lymphoma followed by an outbreak of Hepatitis-B. After 1970, the inhabitants of the same areas were struck by a tetanus infection epidemic followed by a massive appearance of Aids.

Johan van Dongen calculated in scientific studies that about twenty vaccines against Aids viruses were tested in the above-mentioned areas, including the vaccine in Uganda within 45.000 babies and young children. Between 1960 and 1973, these tests were held on a major initiative by the WHO, at a medical field research site in the West Nile District.

From the above-mentioned group of children and babies, each year three times blood were taken in order to investigate a relationship which existed between a common endemic disease and the virus that causes mononucleosis, but of course, that wasn’t their intention, as mentioned by the Dutch professor H.H. Cohen.

Professor Cohen a Dutch vaccine machine Cohen was a physician, bacteriologist, and director of the National Institute for Public Health RIV, on behalf of the Dutch Government. He was responsible for the safety aspects to avoid the manufacture of dangerous or contaminated vaccines. The purpose of the blood they were taking from the children was looking for antibodies against microorganisms which were given to those children and babies by contaminated polio, tuberculosis TBC, and smallpox vaccines.

The years between 1960 and 1973 were exactly those years that massive polio, TBC and smallpox vaccinations, guided by the WHO and CDC and the French Institute Pasteur were inoculated in ignorant African children. The Institute Pasteur for instance, gave more than one million and a half TBC vaccine doses, mostly financed by the Rockefeller’s Foundation, to African natives throughout Africa, especially in Uganda.

Within the same period of 1960 till 1973, antibodies against aids causing viruses were found within almost all these children and babies. The World Health Organization knew all along that Aids was deliberately inflicted on groups of people, mainly Africans.

Prime Minister Sir Winston Churchill The truth of all these allegations appeared in 1984, in Freiburg, when frozen blood samples of these children and babies, stored by Germany and Sweden, was re-analyzed by a curious inter-research group. They revealed that 21% of the collected blood samples of all these babies and children showed carcinogenic viruses as mentioned in 1978, during the Dutch discussion about recombinant DNA techniques in Utrecht the Netherlands.

No less than 66% of blood samples were infected with the Aids virus. Very remarkable is that the mothers of those children mostly were not infected with Aids-causing viruses.