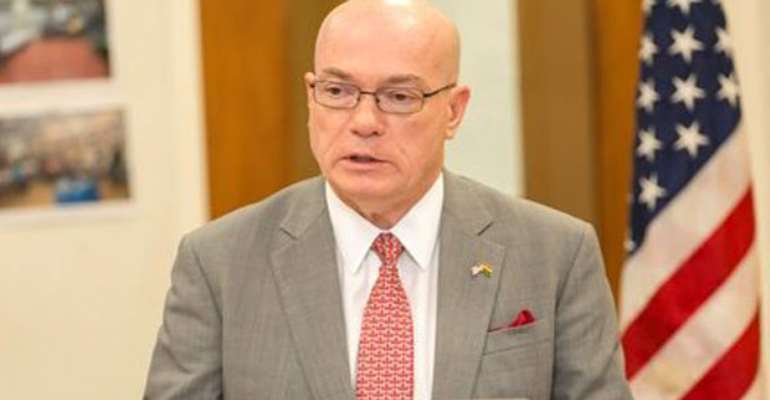 Outgoing U.S. Ambassador to Ghana, Robert P. Jackson, has suggested that Ghana amend its 1992 Constitution to enhance democracy and accountability.

Mr Jackson was of the view that the Constitution should be revised to give the Legislature more authority to check the Executive arm of government.

“I think that Ghana really needs to amend its Constitution to allow Members of Parliament to be able to introduce legislation to be a greater check on the Executive branch,” he told Dr Etse Sikanku on Class91.3FM's World Affairs on Friday, 13 July 2018.

Mr Jackson also proposed the election of District, Municipal and Metropolitan Chief Executives to replace the current system where such officials are appointed by the political party in government.

For him, such a system will ensure more accountability to citizens and this will better enhance Ghana's democracy and its institutions.

“I also think that it is vital that District and Municipal officials be elected rather than appointed so that they can be held accountable by the citizens that they are governing,” he admonished.

President Nana Akufo-Addo's government has said it is committed to ensuring the election of DCEs across the country.

“The Constitutional Review Commission was not entirely against this process; it provided that there should be direct election for the metropolitan assemblies and a different kind for municipal, whereas for the district assembly the status should remain. That was the recommendation, so it is not entirely against it. So we're proposing that we should elect district chief executives – I believe that it is in tune with the constitutional provision.

“If you look at the directive principle of state policy, Article 35, it says that we should ensure that democracy becomes a reality by decentralising political administration and financial resources and ensuring that every citizen feels part of the decision making, in every aspect of national life and I believe that if we elect district assemblies it's one way of accountability. We will get them to be accountable to the citizens.

“For instance, parliament's role is actually legislation but we all want to do development programmes in our constituencies because at the constituency level, people are looking for development. Therefore, if we have a DCE who is supporting development in the constituency and accountable to the people, I think that is the best way to go for it.”