There Is Geographical, Economic and Political Justification for the Creation of New Regions 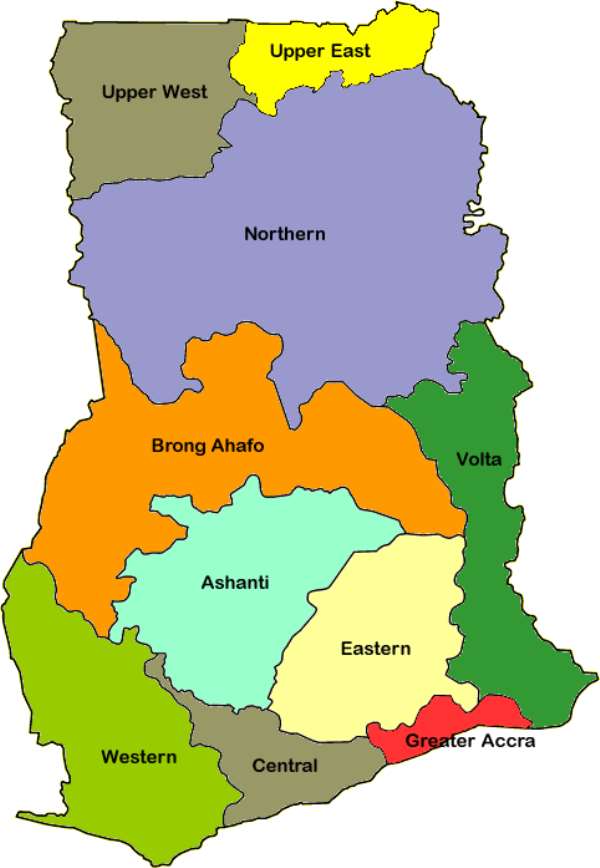 The decision by the Akufo-Addo-led government of the New Patriotic Party (NPP) to create new administrative regions for the country is not the unique fabrication or handicraft of the NPP or its leader. To be certain, had the Mahama-led regime of the National Democratic Congress (NDC) been retained in Jubilee House in the 2016 Presidential Election, Mr. John Dramani Mahama, by his own public testimony, would have embarked on the creation of additional administrative regions. The preceding notwithstanding, contrary to what some narcissistic lawyers and crusading political partisan propagandists, falsely parading as diehard patriots, would have the rest of us believe, there is really an imperative need for the creation of more regions, if also because several of our regional capitals, such as Ho, in the Volta Region, and Sunyani, in the Brong-Ahafo Region, are poorly located service and resource-distribution centers.

These are real geographical problems that need to be promptly and constructively rectified. Then also, traditionally, the way that governance has been done and continues to be done disadvantages those parts of the country that are relatively far from the locations of our regional capitals. Even the locations of our regional hospitals critically inform us about the fact that centralization is still the name of the game, recent modifications in our Fourth-Republican dispensation notwithstanding. I am by the latter reference, of course, talking about the creation of the district and metropolitan assemblies. Consequently, the very scandalous notion that it is the man or woman in the streets of Accra, Kumasi or Sekondi-Takoradi who ought to be quizzed in order to determine whether the creation of an Oti Region is a meaningful enterprise, relative to the acquisition of more hospital beds, the provision of more potable water to boarding students or the building of more toilets in schools or even in towns and cities inexcusably insults the intelligence of the average Ghanaian citizen (See “There Is No Economic Justification for New Regions – Lawyer” CitiNewsRoom.com / MyJoyOnline.com 7/12/18).

The fact of the matter is that the acutely poor level of sanitation in the country has not been because Ghana has 10 administrative regions rather than 5 regions. We have poor sanitation quality in the country because our fiscal and capital resources have been wrongfully prioritized. I am, for example, quite certain that the cost of creating the proposed 6 regions would be far less than the amount of money wasted during the course of the past decade on the criminal settlement of judgment debts, the overwhelming bulk of which has been executed under National Democratic Congress-led or sponsored governments. Then also, we need to talk about the signing of fraudulent contracts by elected and appointed government officials that only benefited a few politicians and their cronies. Which is not to necessarily imply that I am blindly in favor of the creation of the 6 new regions.

Personally, I sincerely believe that only the Oti Region, for reasons already explained above and in previous columns, and some two or three other regions need to be created. I also strongly believe that the present number of parliamentary seats or size of constituencies in the country – at last count 275 – ought to be drastically reduced for both cost effectiveness and our collective political and psychological sanity. With a population of just under 30 million, Ghana’s National Assembly does not need to contain more than 200 seats. Our parliamentary budget needs to be significantly trimmed and whatever financial savings are made more rationally and profitably invested in information technology and the provision of more expert and research services to our Members of Parliament. The political justification for the creation of more regions can be seen in the fact that the more administrative centers are created, the closer is the central government brought to the rural communities where the overwhelming majority of Ghanaian citizens still live.

At any rate, it should not be that the creation of more regions ought to be predicated on the economic benefits that would accrue from the process. Even so, we need to recognize the fact that the creation of a new regional capital means that the inhabitants of the newly created regions are likely to be allocated more equitable development resources, where in the past they only received a piddling sliver of the budgetary allocations out of a much bigger region the bulk of whose resources were concentrated on the remotely located capital that was primarily determined according to the interests of the erstwhile colonial regime. For the information of the adamant economic determinist critics, most of the present 10 regions of Ghana were created strictly along cultural and ethno-political lines rather than being primarily based on economic exigencies.

We live in a parliamentary democracy, which means that local/ized decisions, such as the creation of more regions, ought to be primarily determined by the people who will be immediately impacted by the creation of these new regions, positively or negatively. It should not be somebody strolling the streets of Akyem-Tafo or Kukurantumi, for example, who ought to be telling another person living in Kete-Krachi whether there is a need for the creation of an Oti Region or not. Yes, we are all of us Ghanaian taxpayers and coequal citizens, at least constitutionally speaking. So why this nonsensical lame talk about citizens from other parts of our country calling the shots about the destiny of citizens of another part of the country?