By Oral Ofori of TheAfricanDream.net 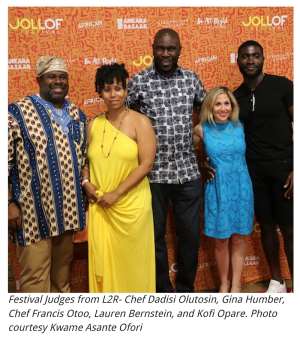 “I was super fine when I saw online that Liberia jollof had won the 2018 jollof wars at the Jollof Festival in Atlanta, Georgia — my day was made. Then on July 7 am told Liberia wins again and is named the best country for cooking West African jollof in Washington, District of Columbia (DC). Dude that made my life!” — Augustine Jebor.

That was how Augustine Jebor reacted in a phone interview from Ghana as he shared his elation with TheAfricanDream.net about his birth country Liberia winning the 2nd annual Jollof Festival held by Afropolitan Insights at the historic Union Market in Washington, DC.

The Liberian-born Ghanaian rapper known in showbiz as AJ Dahottest told TheAfricanDream.net, official media partner of Jollof Festival that, “My heart belongs to both Ghana and Liberia, so I was disappointed when none of them won last year, but I least expected Liberia to prove this strong a point, the people have spoken, Liberia is back, I hope President George Weah sees this one bro.”

After the DC event Ishmael Osekre of Afripolitan Insights also said to AmeyawDebrah.com that, “we are very thankful to all our sponsors for this year’s festival, from our guest-judges, DJs, performers, vendors, to artists and indeed the entire African Diaspora community worldwide for the massive support given us.“

“We had over a thousand people from all walks of life with us here today, and that’s what this festival is all about, uniting people under the power of food while we explore and share our respective cultures and talents,” Ismael also told TheAfricanDream.net while thanking sponsors of this year’s festival including The Afrobuzz Show, Best of All World Entertainment, VIP Socio and The Adinkra Group. Other sponsors were the Central Union Mission, Yelp, Ankara Bazaar, World Remit, 1230 DC, State Farm, and media partner TheAfricanDream.net

What was peculiar about Liberia’s win was that it was the festival’s first time using anonymous voting and the first time it also had five judges, two of which were culinary experts in the persons of US-based Chef Dadisi Olutosin of Plated Food Groupe and Executive Chef Francis Otoo of the Embassy of Ghana in DC.

The remaining personalities on the panel-of-judges were Lauren Bernstein of the Culinary Diplomacy Project, CEO of Diversity is A Verb – Gina Humber, plus surprise addition and professional soccer player Kofi Opare from the US Major League side DC United.

According to the judges’ verdict, behind Liberia jollof and in second place was Sierra Leone, while Ghana came in at 3rd place. Defending champions from last year Nigeria did not place this year, so did Senegal, Guinea, and Sierra Leone, though they all showed up to add spice.

Jollof wars continue in a street corner, kitchen, bedroom, church or mosque near you. Wherever the battle happens next, just remember jollof rice is the most debated dish in West Africa and if you have not tasted it, well you are not late to the party, there is still hope, so let Liberia jollof inspire you.

There might also yet be hope for Ghana, Nigeria, and jollof originator Gambia, to clinch a victory or even two as the festival travels across the US. Organizers are making stops at California later this July, New York, and the United Kingdom this September.

Find out more about this growing event in the African Diaspora that looks to spread its tentacles across the globe by visiting www.jolloffestival.com. Watch video of the results announcement in this link: https://youtu.be/5AePFKJ5T-Y