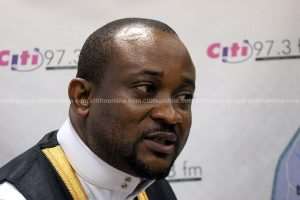 According to him, the President, Nana Addo only lifted the suspension because he is due to tour the Volta Region on official duties.

The President from today [Monday], is expected to arrive in the Volta Region on a three-day working visit.

James Gunu is thus of the view that the president only lifted the suspension because the youth of the region were threatening to protest the suspension of Pious Hadzide.

“In fact, we would have prevented the president from entering the Volta Region on Monday. The youth and opinion leaders are not happy with his decision to suspend the Deputy Minister. But his decision to reinstate him has paved the way for him. That is why I am saying that he had to quickly lift the suspension because of the tension he picked from the grounds. It is not for any outcome of an investigation” he claimed.

The Deputy Sports Minister was suspended to pave the way for thorough investigations into the Australia visa scandal that hit the Sports Ministry.

The President at Koforidua during his party's delegate’s conference over the weekend, announced that the Deputy Sports Minister had been cleared of any wrongdoing.

When asked whether he was not satisfied with the reasons for the reinstatement, James Gunu insisted it was not the case.

He thus challenged the presidency to publish the outcome of the said report that exonerated Pious.