US Group To Invest Over US$5.4 Billion In 4 African Countries 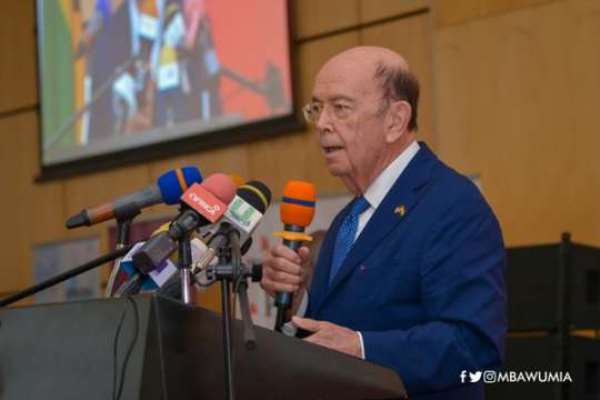 The US Department of Commerce had also established Government-to-Government Memoranda of Understanding (MoUs) with governments of Ghana, Ethiopia and Kenya to improve trade and partnerships.

The American firms that travelled with the US delegation to Africa also signed over a billion dollar deal with some African companies and expects to sign an additional two billion dollars in the near future.

Mr Wilbur Louis Ross, the United States Secretary of Commerce, made the announcement at the maiden Ghana-US Business Forum, in Accra.

He said it showed how US was moving from aid to trade in her relations with Africa, noting that, many American companies had maintained their operations in Africa and ready to expand.

He said the signing of the Agreements demonstrated the US's commitment to high quality and sustainable development that would benefit millions of Africans and create good relations between Africa and the US.

The forum attracted business delegation from the United States President Donald Trump's Advisory Council on Doing Business in Africa, comprising 60 representatives from 20 companies and government agencies, captains of industry, influential business leaders and trade and technology experts, who discussed trade and investment opportunities between Ghana and the United States of America.

'Strengthening US-Ghana Commercial Partnership towards a Ghana beyond Aid' was the theme chosen for the event, aimed at fostering and deepening bilateral commercial engagement between the two countries to promote investments.

It also sought to strengthen trade and promote business partnerships between US and Ghanaian companies in areas of infrastructure, technology, railway and renewable energy.

Mr Ross said his visit to Ghana was aimed at re-enforcing and building strong business ties between the two countries, adding that, the US was committed to be a strong long-term and stable partner in Ghana's economic development drive.

He said the US wanted governments of Africa to improve their business climate, grow digital economies and create international competitive and productive agricultural, healthcare, energy, manufacturing and service sectors.

Mr Ross said strong economic growth led to strong societies, noting that, the 1.3 billion African population was important to the global economy and assured that the US would continue to deepen her commercial engagements with Africa and ensure long-term trade and economic partnerships.

He said for instance that, high quality infrastructure provided by the US would serve as a strong foundation for economic growth and prosperity, which tied in with the Ghana Government's vision of building 'Ghana beyond Aid' agenda.

He stressed that changing from aid to trade would greatly impact on the citizens adding that, the US had no intention of exploiting Africa's natural resources at the expense of her people.

The US Secretary of Commerce urged African nations to be comfortable engaging with American companies in partnerships, noting that, the American companies based in Africa were required to abide by the Foreign Corrupt Practices Act passed by the US Congress in 1977, which prohibits US firms from bribing Foreign Affairs officers and engaging in other corrupt practices to win contracts.

The move, he said, proved the determination of the government of Ghana to fight corruption and, therefore, asked government to adequately resource the Special Prosecutor to function effectively.

Mr Ross said the US trade with Ghana reached US$1.6 billion last year and expressed optimism that it would increase in the ensuing years.

He gave the assurance that the US would support the nation to move from natural resource extraction economy to that of value added, vertically integrated, manufacturing and service based industry.

He lauded the government flagship initiatives including the 'One-District, One Factory' programme, noting that, many American companies were ready to support the initiative.

Election 2020: You'll have ‘fugitive’ president should Maham...
42 minutes ago