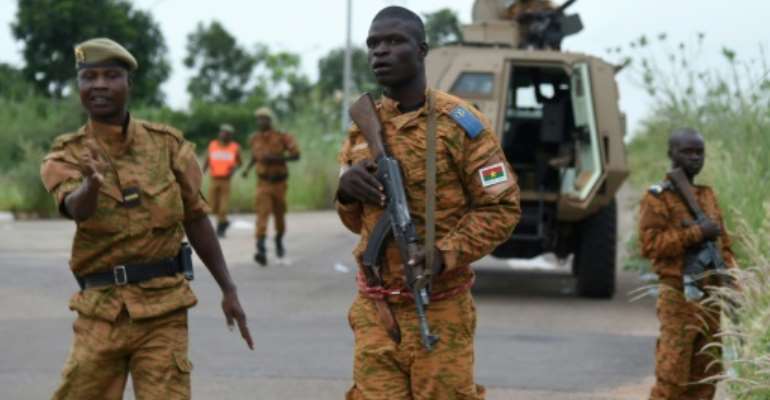 Soldiers loyal to Burkina Faso's government stand guard in Ouagadougou in September 2015 after an elite unit of presidential guards attempted to overthrow the country's transitional government. By SIA KAMBOU (AFP/File)

The leader of a group that carried out an attempted coup in Burkina Faso on Friday conceded in court that the events of 2015 had been an "attack on state security".

Chief Warrant Officer Moussa Nebie told the hearing in Ouagadougou he had been given an order by his regimental sergeant major Eloi Badiel to arrest the transitional government's president and his prime minister.

He said he took some men and went to the presidential headquarters where a cabinet meeting was being held.

"I went in and told President Kafando (Michel) that there was an attack and that we had to get him to a safe place.

"Without hesitation, the president followed me and I took him in his vehicle with his bodyguard," Nebie said.

Eighty-four defendants are on trial over the September 2015 attempt to overthrow the transitional government, which took power after president Blaise Compaore was ousted a year earlier.

Behind the coup was an elite unit of presidential guards loyal to Compaore, who took the country's leaders hostage before being thwarted by army-backed street protesters who attacked the plotters' barracks.

Nebie's lawyer Solange Zeba said his client accepted that he had arrested the president, but added that that alone did "not constitute a coup".

Fourteen people died and 270 were injured in the unrest.

The defendants are being tried on a range of charges including treason, undermining state security and murder in a case seen as a test for the judiciary in the West African country.

Among them are two generals thought to be the ringleaders -- Gilbert Diendere and Djibrill Bassole, who served as foreign minister under Compaore.