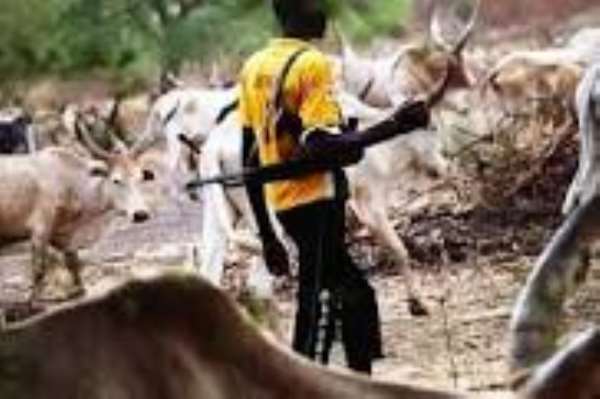 The news was about a cow or so that got lost or so, and the Fulani herdsmen mandated the section of Enugu where the cow(s) was missing to pay them the sum of N2m. Out of the said money, I learned that the Enugu people were able to raise 600k for the Fulani herdsmen in order to avert attack on them as has been wont of the Fulani people in the recent times.

This is intimidation taken too far by the Fulani just for the reason that Maj. Gen. Muhammadu Buhari, who is a Fulani, is the President of the country. They did not even address the issue in a court of competent jurisdiction. Imagine! This is also intimidation taken too far for the Fulani to say on the newspapers of Sunday, July 1 2018, that all the lands across the country belong to them. I’m not happy about this: For the Fulani to be taking prejudice as stubbornness. Indeed, crass stubbornness.

While the Fulani have been sending out messages worse than kill people, kill pregnant women, kill children in many parts of the country just for the purpose of grazing, just for the purpose that they want their cows to graze, newspapers few days ago reported the presidency as saying that the native peoples across the country should give the Fulani lands in order to quell the incessant attacks on people by the Fulani.

This is odoriferous of a presidency that sees ethnic bigotry to be superior to the country’s Constitution. This is psychosis. Now, you wonder why Nigeria just exists as one country only in books and not in the hearts of the peoples of Nigeria. On that Sunday, the Fulani said that they will stop at nothing till they realize or actualise the proposed ranches for them across the country.

Their mindset is that if the Federal Government could support farmers why not give herdsmen ranches. Imagine where a business that was supposed to be an individual affair has been causing lives in Nigeria and the presidency was water-in-mouth to caution these herdsmen who have turned a once lucrative business into terrorism. You now understand where my fever lies.

It is sad that the Fulani are controlling Nigeria by the fear they have been infusing in different villages and towns through messing up with the people’s lives and property. All that the government of Buhari would give as hope to us, the victims, is that he would bring the perpetrators to book. Yet, we are yet to see any book where any Fulani culprit name has been written. They are rather released unconditionally when eventually arrested or conscripted into the Nigerian Army.

The truth is that while they continue to kill for their cows to graze, they cannot turn other Nigerians into a piece of wood to do what they wanted. There will be no room for them to get other Nigerians by the balls for their lucre purpose of making Nigerians’ hearts and minds to follow their grazing proposals. Nigeria is not District Thirteen, where some renegades took their victims’ children and sacrificed them and nothing happened. When the victims lifted a finger, every last one of them was extirpated.

What many Nigerians had expected from Buhari was to re-echo his stance of “Baboon and Chimpanzee’s blood” would soak in the ocean if Fulani herdsmen continue to disturb the peace and serenity of Nigerians. For where! Rather, he would prefer cows having a colony instead of human beings from the Biafra extraction having independence. Imagine this!

The Fulani make everything a burden of self-importance. They are like the narcissist, according to a Criss Jami in the work ― Killosophy ― who “reconstructs his own law of gravity which states that all things and all creatures must adhere to his personal satisfaction, but when they do not, the pain is far more intense than it is for one who is free from the clamors of ‘I’.”

It gives me fever that when I read about Fulani, all that I see are burden, ego, fear, intimidation, narcissism, pain, paranoia, self-centeredness, threat. Why? I am horror-struck.

It is time the Fulani stopped stressing the commonness of heroes. This is a democracy, not Fulanicracy. They should stop oppressing others and call such greatness. Fulani herdsmen’s lucre for cow colony is a perfect sign of mental unhealthiness.

The Fulani should understand that those they have killed for their cows to graze, or those they have killed for the purpose of land-grabbing, were the true heroes because they preferred to die instead of feel inferior to the Fulani ideal. Many other Nigerians who prefer essences to ideals such as cows’ colony or land-grapping being the Fulani proposals across the country, are ready to die instead of give in to this Satanic agenda.

Other Nigerians will prefer to die for democracy, egalitarianism, equality, essence, glory, greatness, instead of buying in the inferiority, intimidation, jealousy, mediocrity market, that the Fulani want to sell across the country. This is not 1600 century. This is the 21stcentury when the future of the world is in digital technology, not in the parochial ideal such as open grazing.

However, a Fyodor Dostoyevsky captures this Fulani neurosis in “…Tyranny is a habit, it has its own organic life, it develops finally into a disease. The habit can kill and coarsen the very best man or woman to the level of a beast. Blood and power intoxicate… the return of the human dignity, repentance and regeneration becomes almost impossible.”

It therefore behoove the Fulani to proof Nigerians wrong that it is dangerous in Nigeria when the Fulani make everything a threat.

Akufo-Addo is sleeping on the job, he’s a failure – Ofosu Am...
57 minutes ago